In Lesson2, we will show you how to tie a basic yukata, “bunko knot,” with a video.

Wrap a belt around the torso 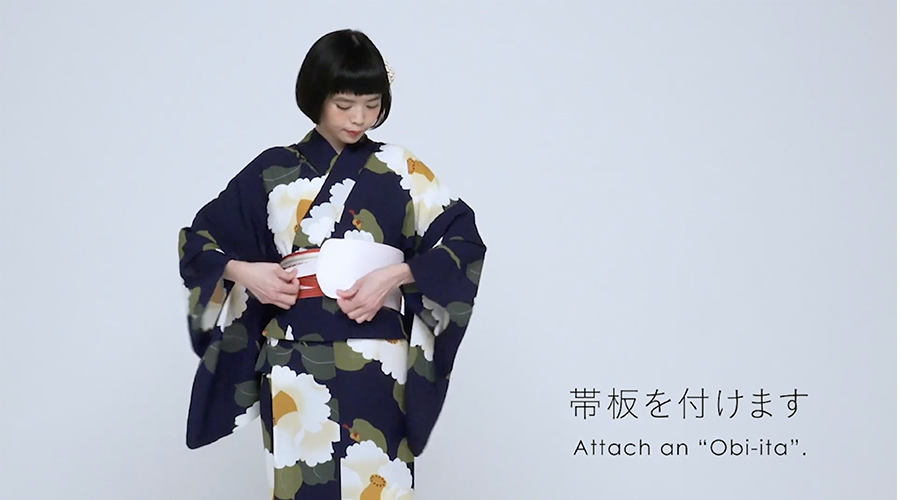 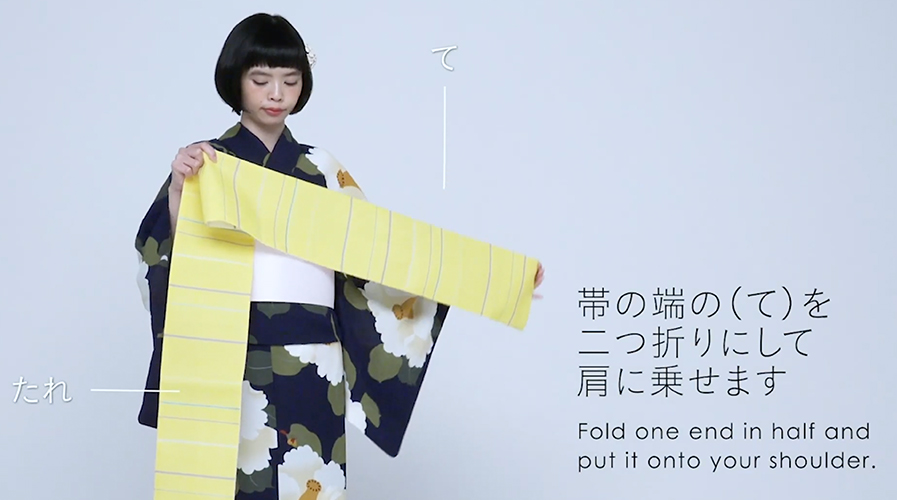 Step2
Adjust the length of the belt

The tip of the belt is taken about the length of the arm, it folds in two in the vertical half, and it places it on the left shoulder.In that case, let's put it so that the valley side of the two folds comes near the face.It becomes easy to tie the belt when the part of the two folds is kept by using the clip etc. with the dressing. 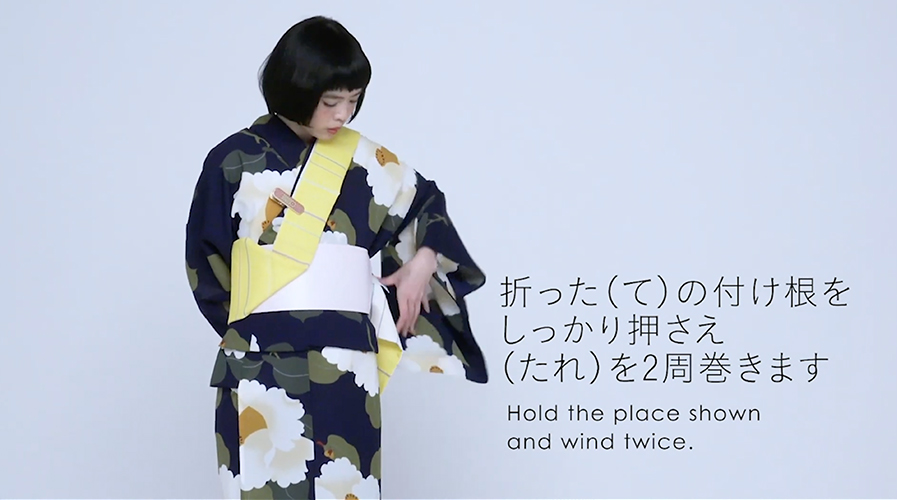 STEP3
Wrap the band around the fuselage.

Spread the belt from the tip of the fold and wrap it around the torso for two laps.In this case, let's wrap it while tightening it so that it does not loosen while holding the part of the beginning of winding.
In the case of a belt plate without a belt, please insert it into the inside of the belt so that the belt board comes to the back side at this time.
Let's fold the end of the winding diagonally, and keep it to the part of the belt which wraps around the torso with the wearing clip. 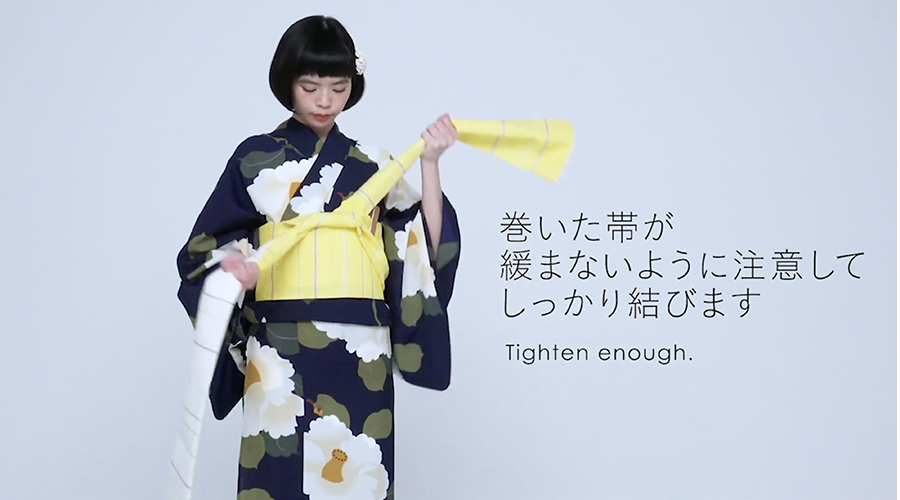 While pulling so as not to loosen the tip, lower the tip that was on the shoulder and tie it so that the tip comes up.After firmly tying it, it becomes difficult to untie it when you make it vertical and put the tip on your right shoulder. 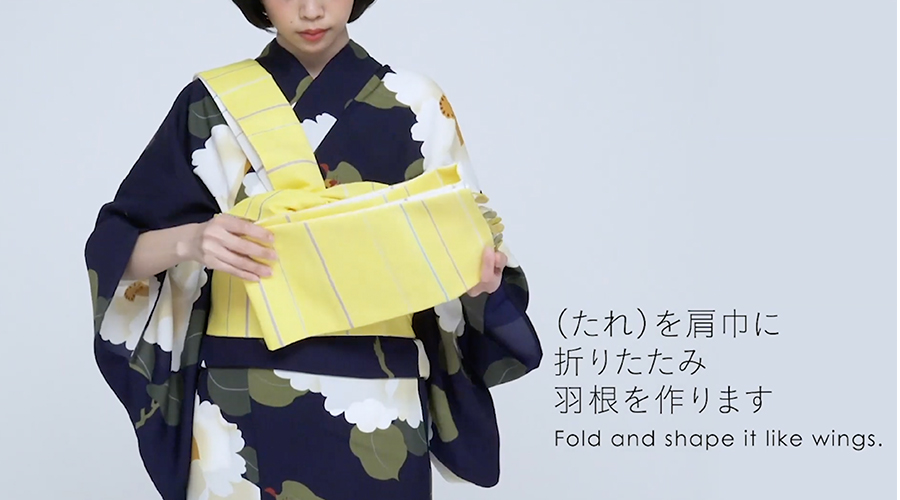 STEP5
Make a feather that becomes a ribbon

Make a folding blade on the shoulder.Please adjust the width according to the taste of the size of the finished blade.The center of the blade comes to the part where there is. 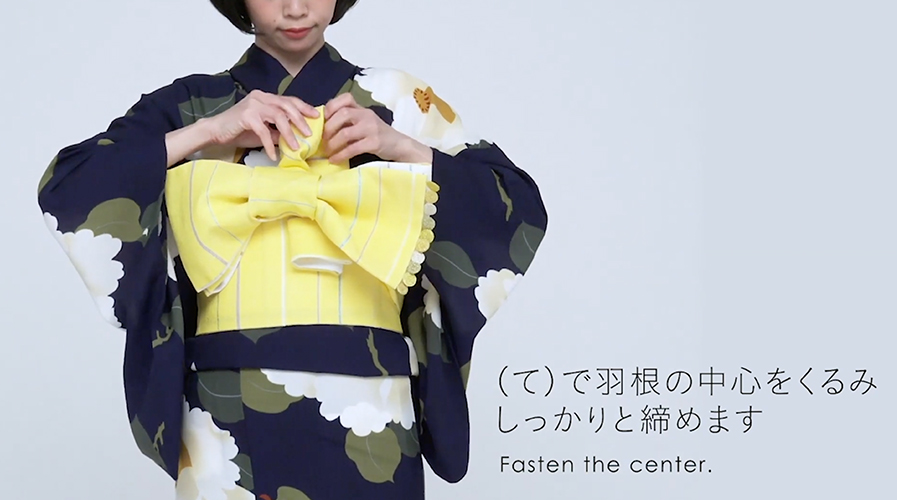 STEP6
Wrap the center of the feather and tighten it firmly

First of all, fold the center of the blade so that it becomes a mountain folding, a valley fold, and a mountain fold, and the shape of the ribbon is made.Holding down with the left hand so that the shape made does not untie, the tip is lowered with the right hand, and it passes from the bottom to the top so that the center of the blade is wrapped.Pull it firmly on top and tighten it.
After repeating about once or twice, fold the excess part and put it in the belt.

Turn the belt and prepare 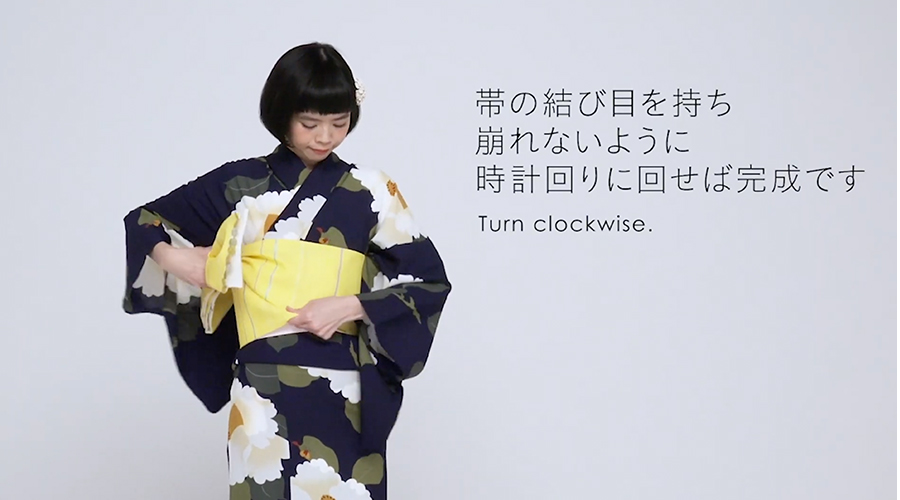 STEP7
Turn the band back.

Once the ribbon is in shape, turn it clockwise so that it doesn't collapse, holding the knot of the belt.
In this case, because the collar of the yukata becomes only when i turn it counterclockwise, let's turn it clockwise by all means. 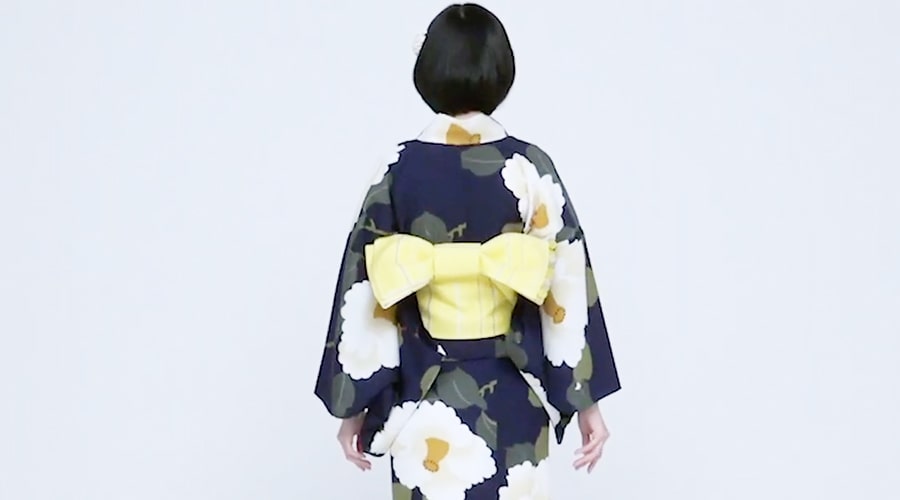 When the ribbon comes to the center of the back, it is complete.

How was it?
The strip is a band with a rich variation of how to tie.
If you can tie the basic paperback, it will be easier to challenge other knots, so please look for the way you like.
If you are unsure of obi knots, we offer dressing lessons to customers who purchase yukata and obi at furifu's store.
Because it becomes a limited time, please contact the store staff for details.

※It is a service only for the actual store.If you buy in an online shop, it won't apply.
LESSON1
Yukata dressing
LESSON3
How to wear juban

You can do it alone!
Furifu dressing lesson video

From the basics of dressing, we will explain the procedure of furifu original obi knot in an easy-to-understand video.