Ayako Nagahashi, director who has created numerous hit works since the opening of Furifu since the beginning. I will remember the footsteps of “Furifu” from 1999 to today with her memory.

【Collection/2005-2009】
In the 2005s when Furifu started original textiles, antique kimonos were booming mainly in Harajuku, Tokyo. 2005-2009, which is also the basis of the present furifu. We will unveil the last five years with textiles and visuals. 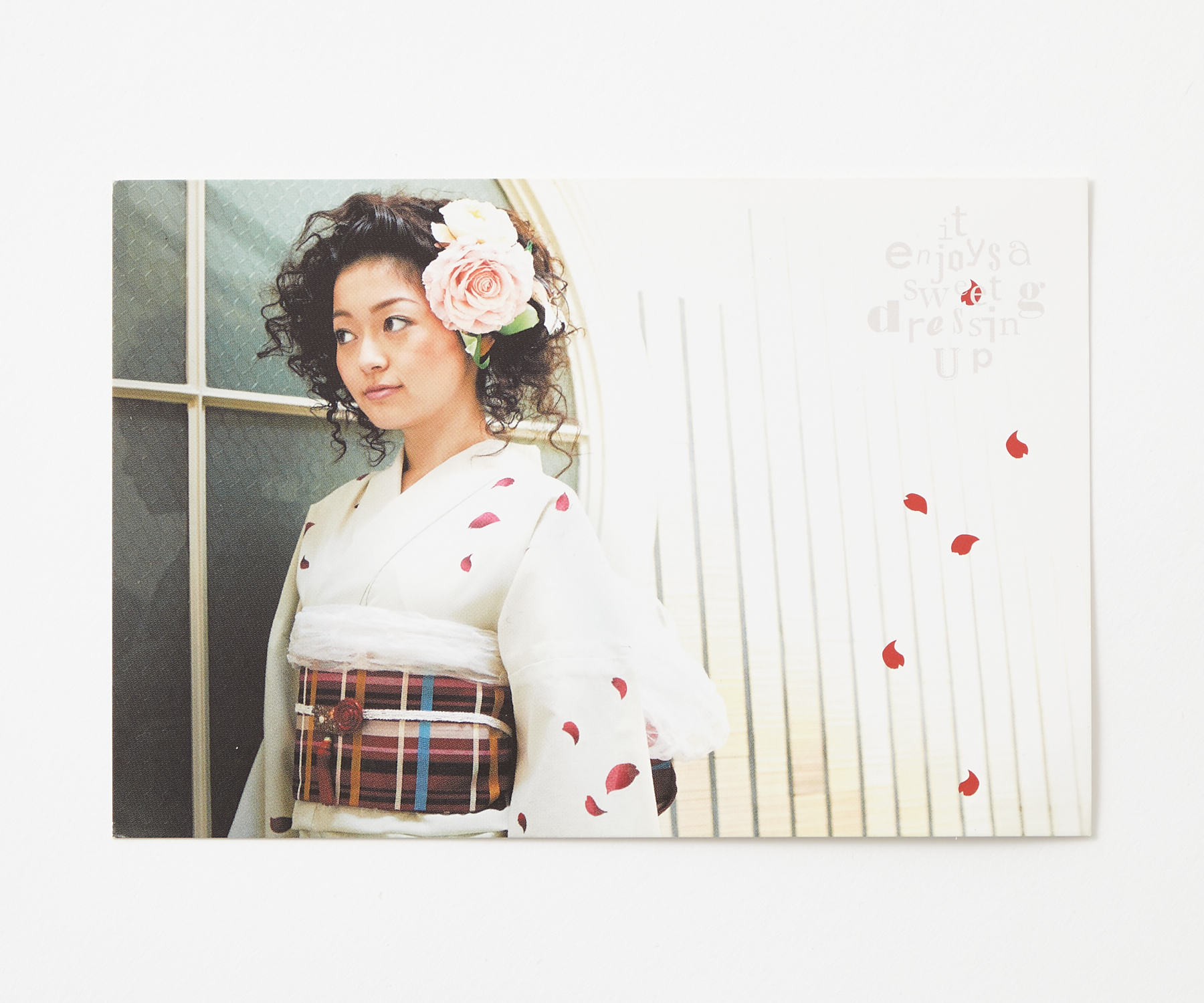 -“Rose,” which was born in the early days as an original yukata, became a huge hit with more popularity than expected
“Rose” is a yukata that is made by paying close attention to the direction and angle of each flower so that the petals appear to be dancing. This is the first item that was purchased by so many people. I think the reason why it was a hit was that a yukata with a picture feather pattern that had a pattern on the shoulders, sleeves, and hem like a “rose” was uncommon at the time, but many customers accepted this work. By doing so, I think that I was able to find the strength of the furifu that there is nothing else. 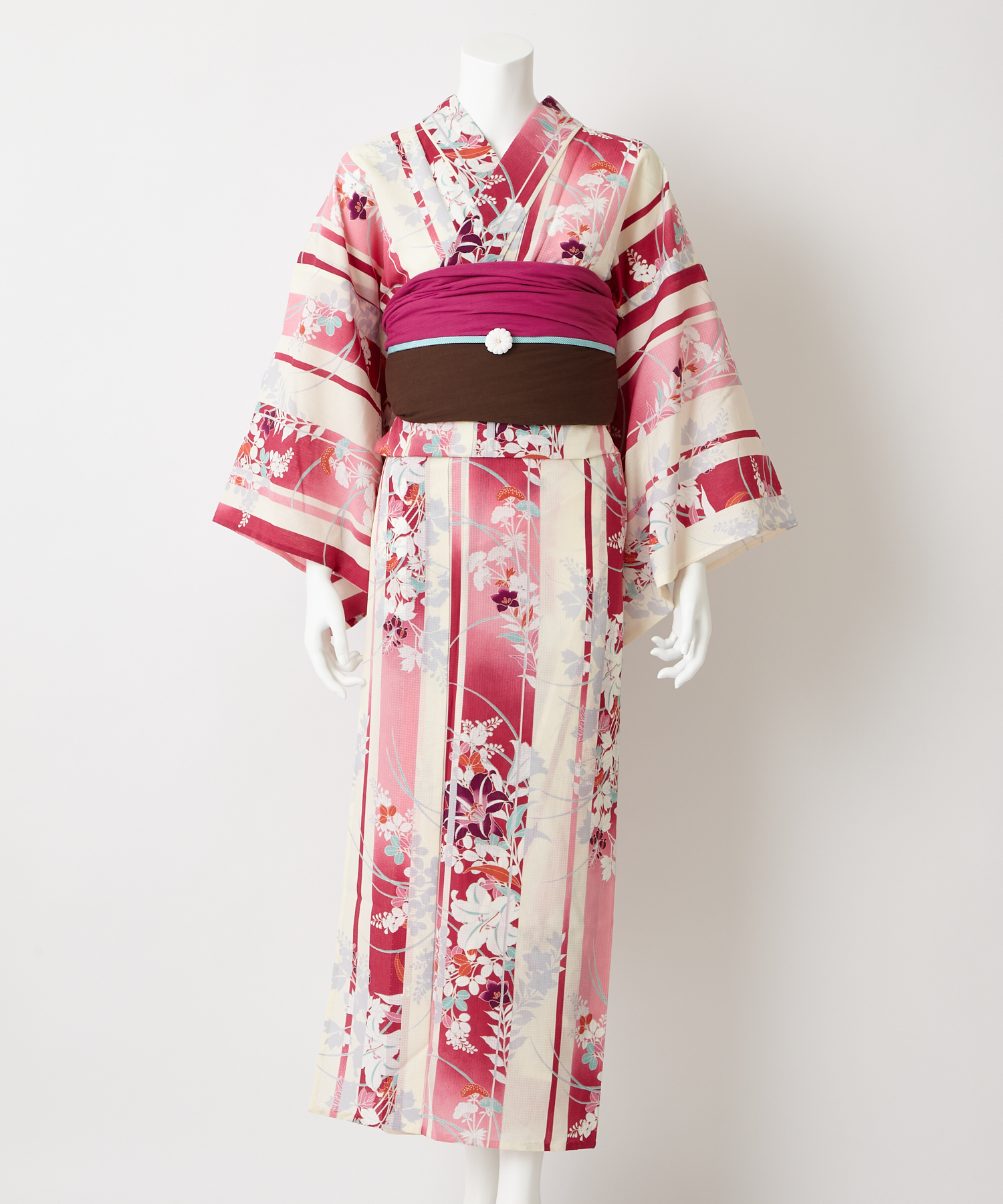 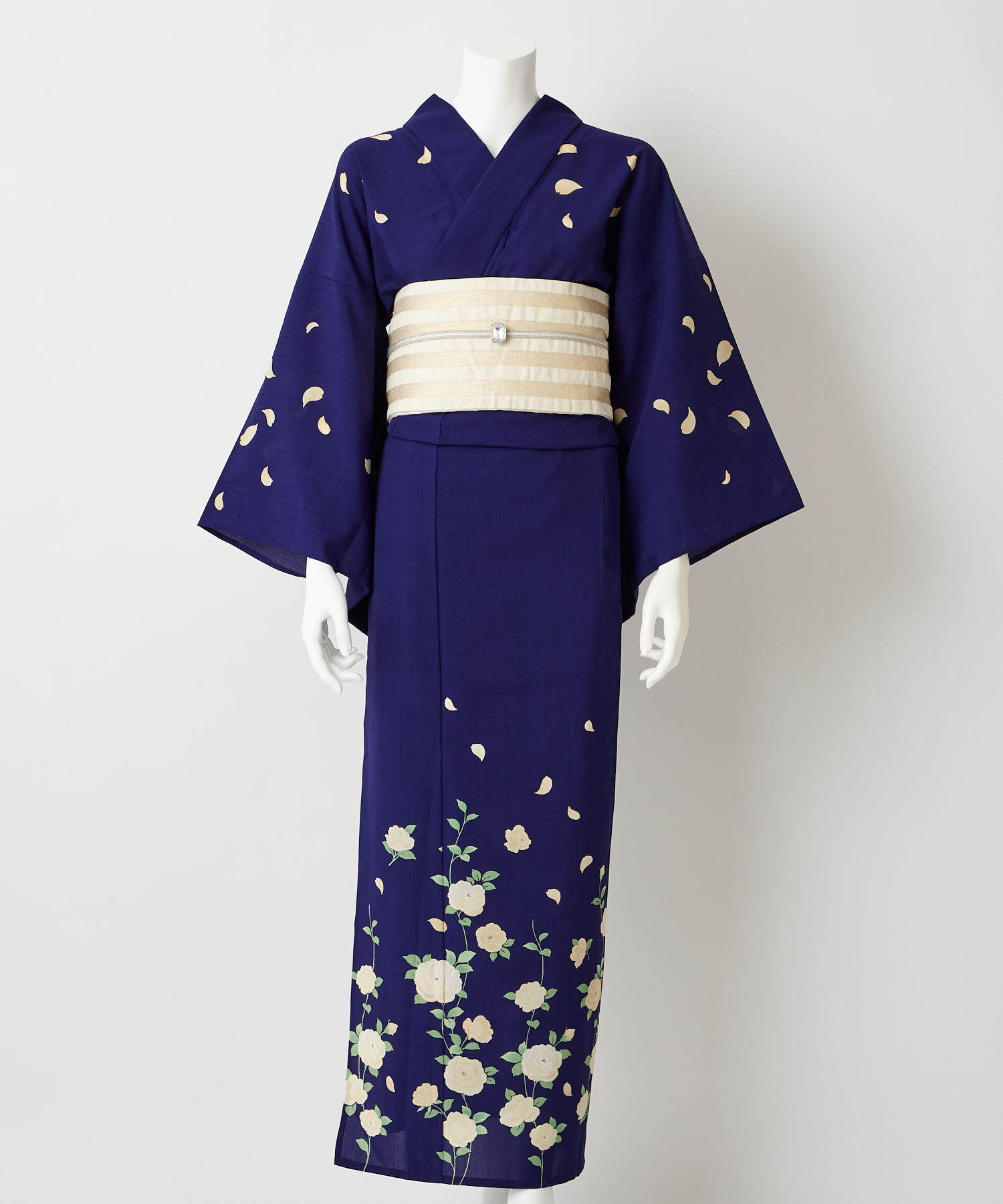 -I think you have a lot of textiles that remind you of kimono, but were you aware of that?
When I started making yukata, I didn’t intend to design the kimono in consideration of its design. However, I think that it was this style because I thought of the yukata itself as a single picture. That’s the only reason “this is cleaner”. Most of the yukata at that time were mainly navy blue and white, but I knew that it would be nice to have yukatas with many colors, and I made a colorful yukata.


2006 Postcard production that describes the history of the collection 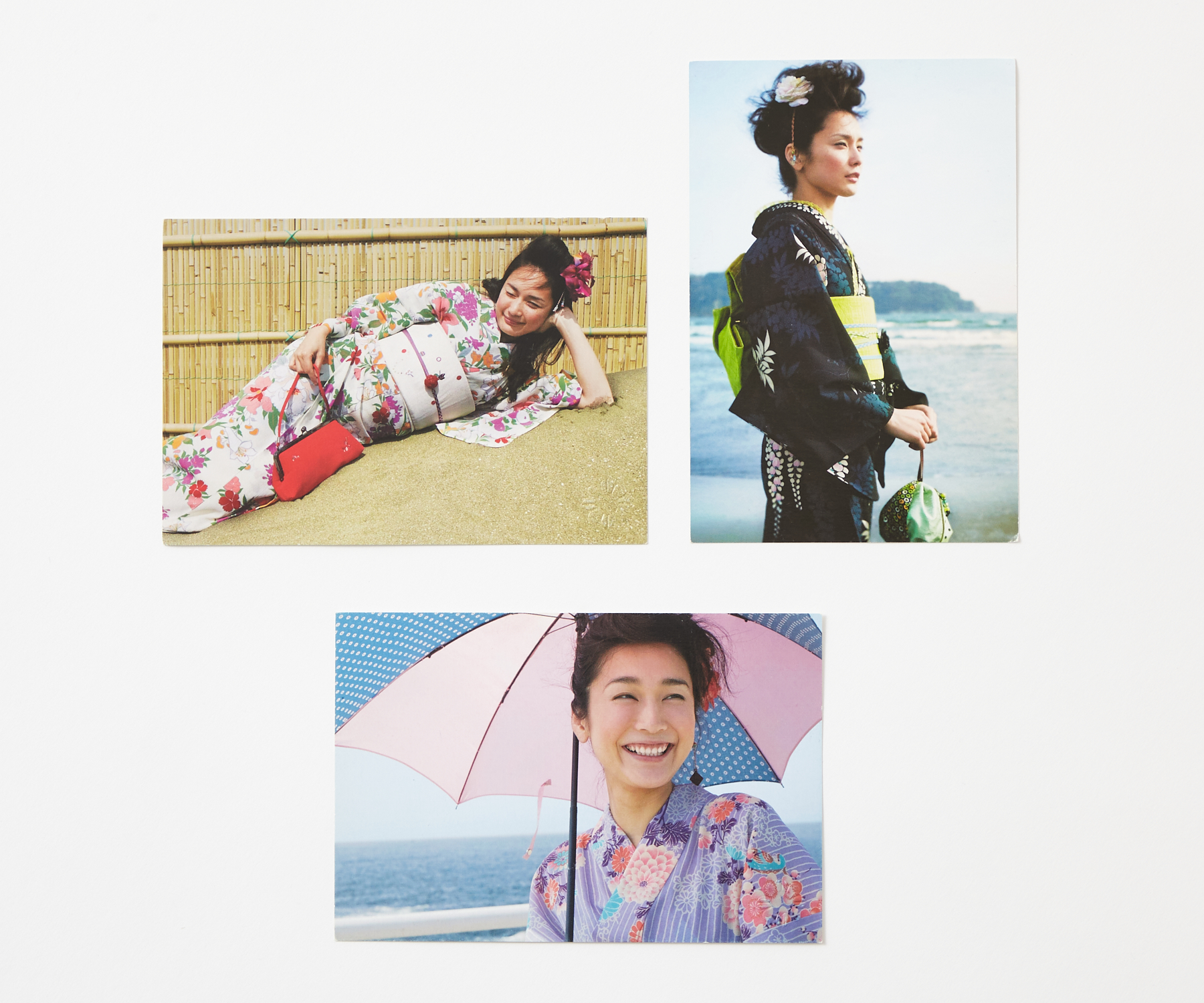 2006 Postcard Shooting at the beach

-It was around this time that you started making postcards.
I started making postcards even after I started making my own yukata, but at this time everything was in a groping state. I was desperately trying to figure out how to shoot better with a much smaller budget (laughs). However, since I was going to make original textiles as a collection in the future, I had a strong desire to keep the work as a visual. At that time, we were expanding the number of stores, so we used postcards as a tool for selling yukata. 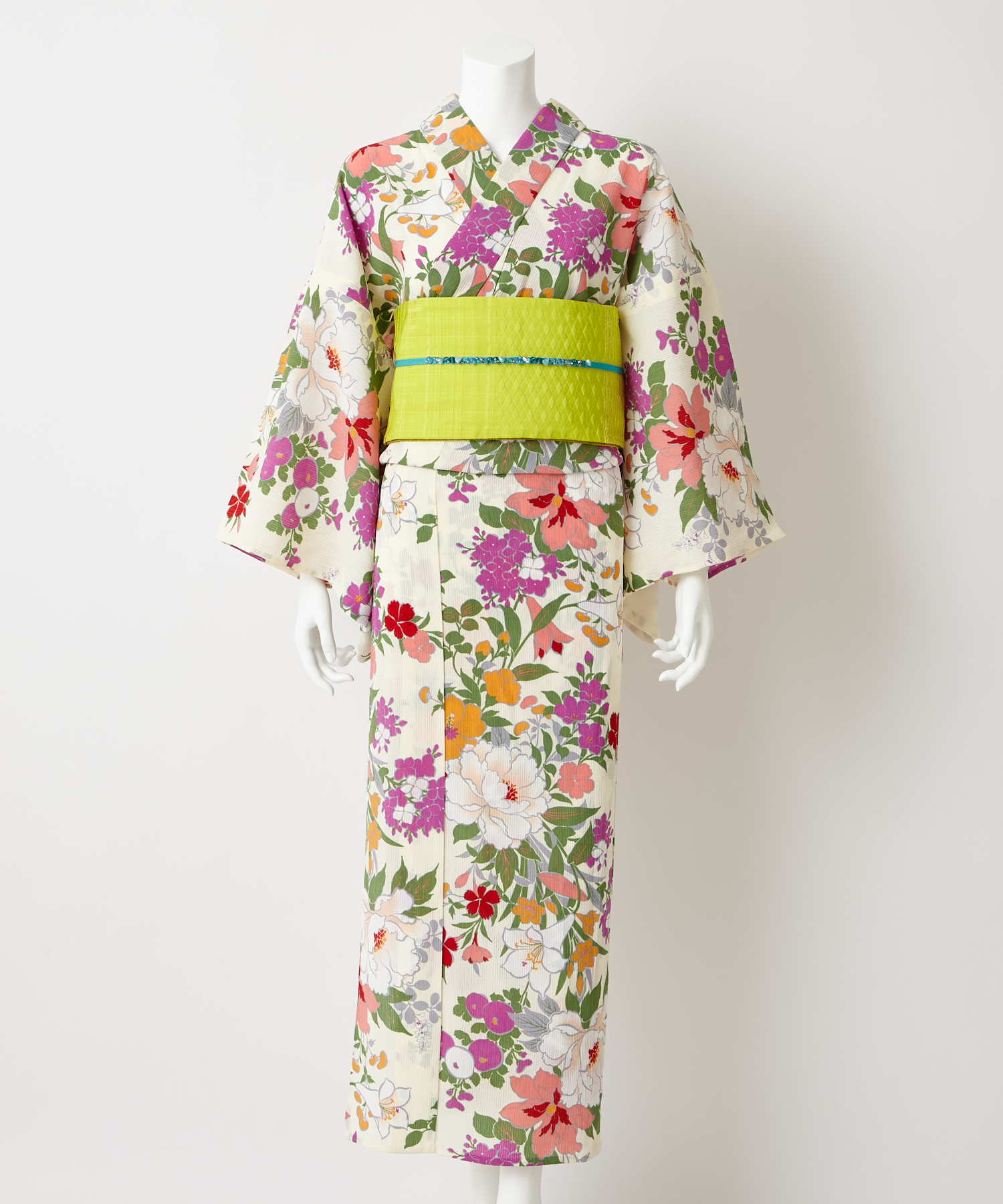 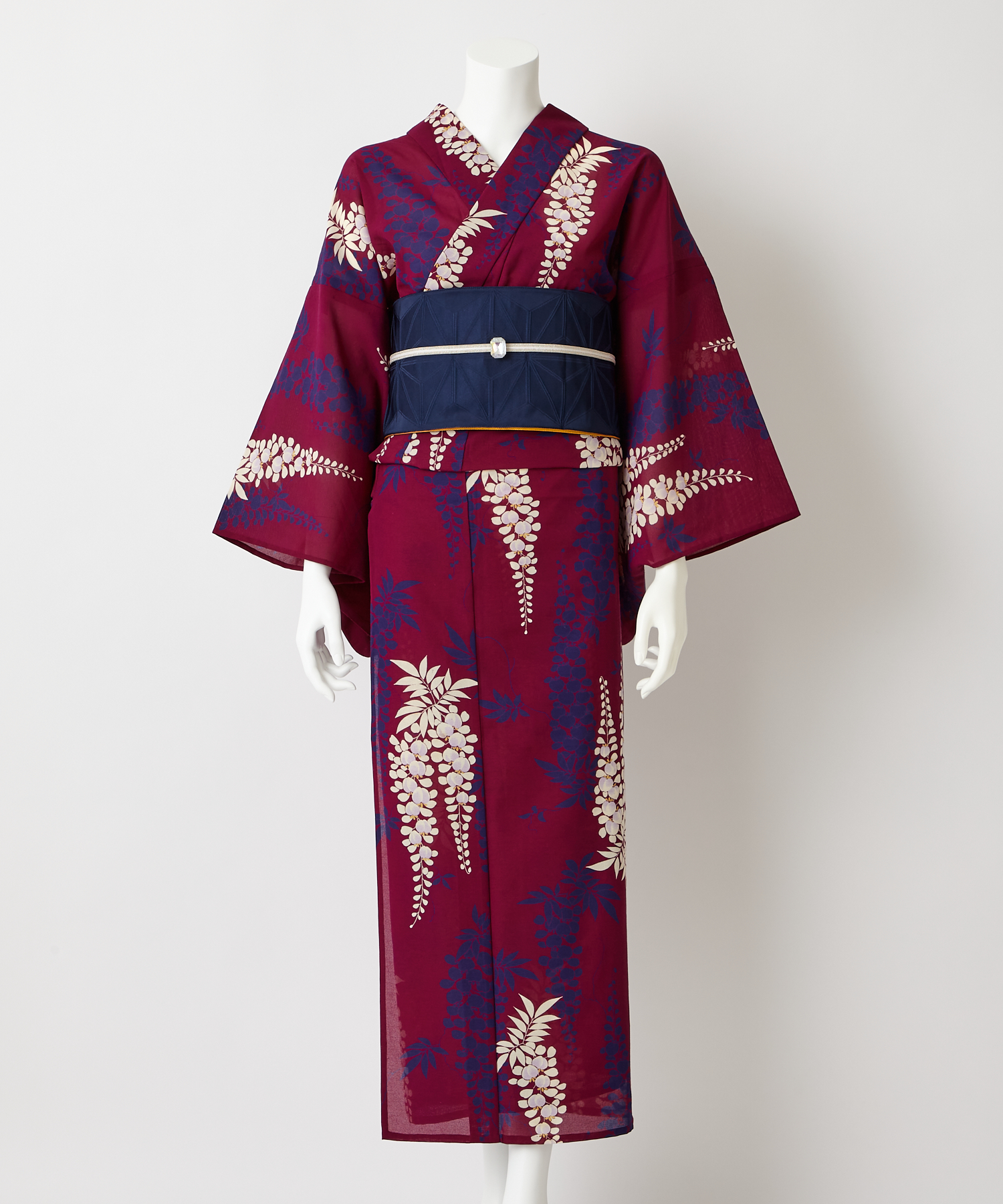 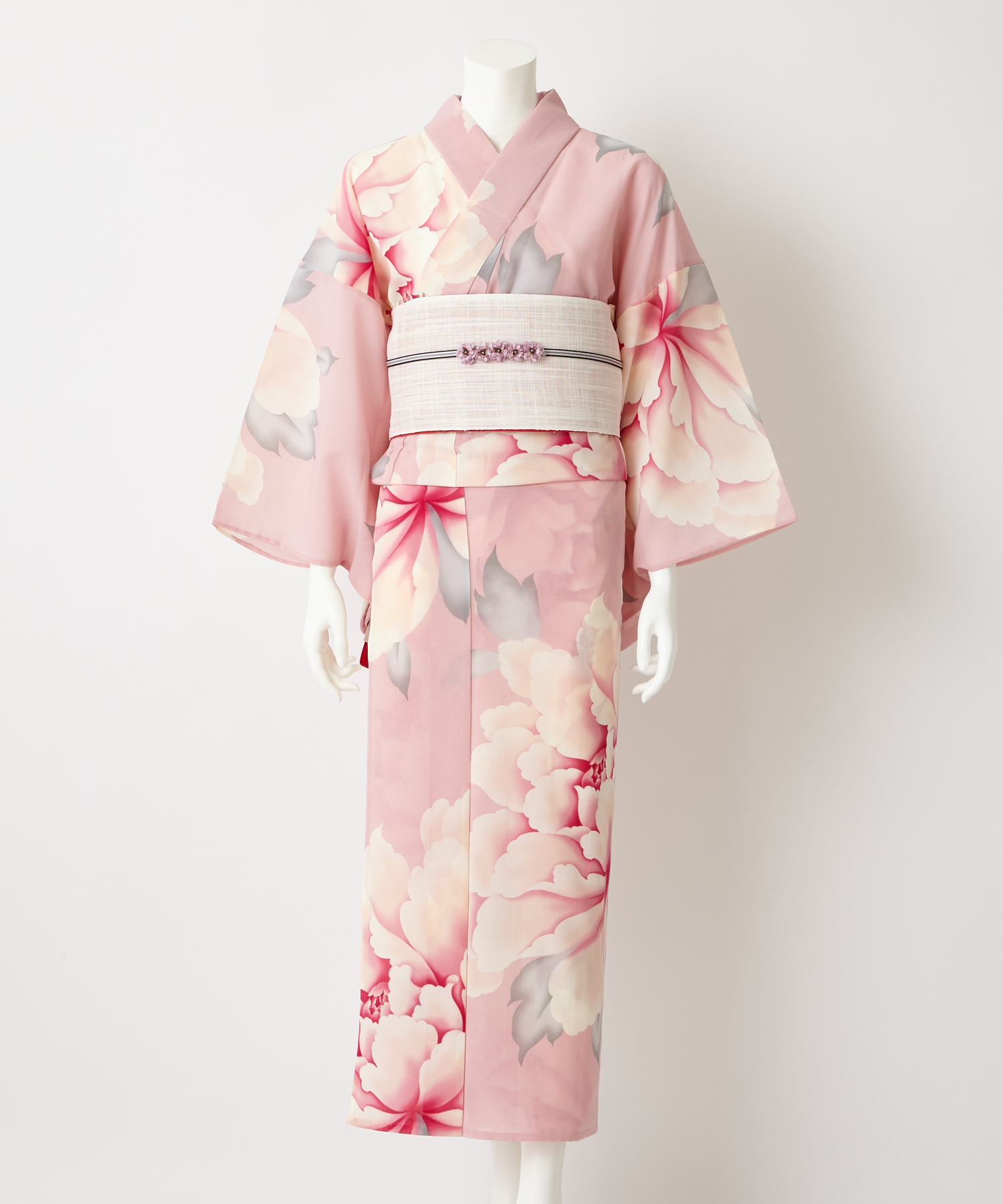 -Every season, the yukata naming is unique.
I named “CAROL” because I thought, “If you are a rock star lover, you should wear a stylish yukata with large peony like this.” I had the image of a yukata that only a good woman could wear. I’m very particular about color, so I remember making this yukata a number of times until it was exactly what I wanted. 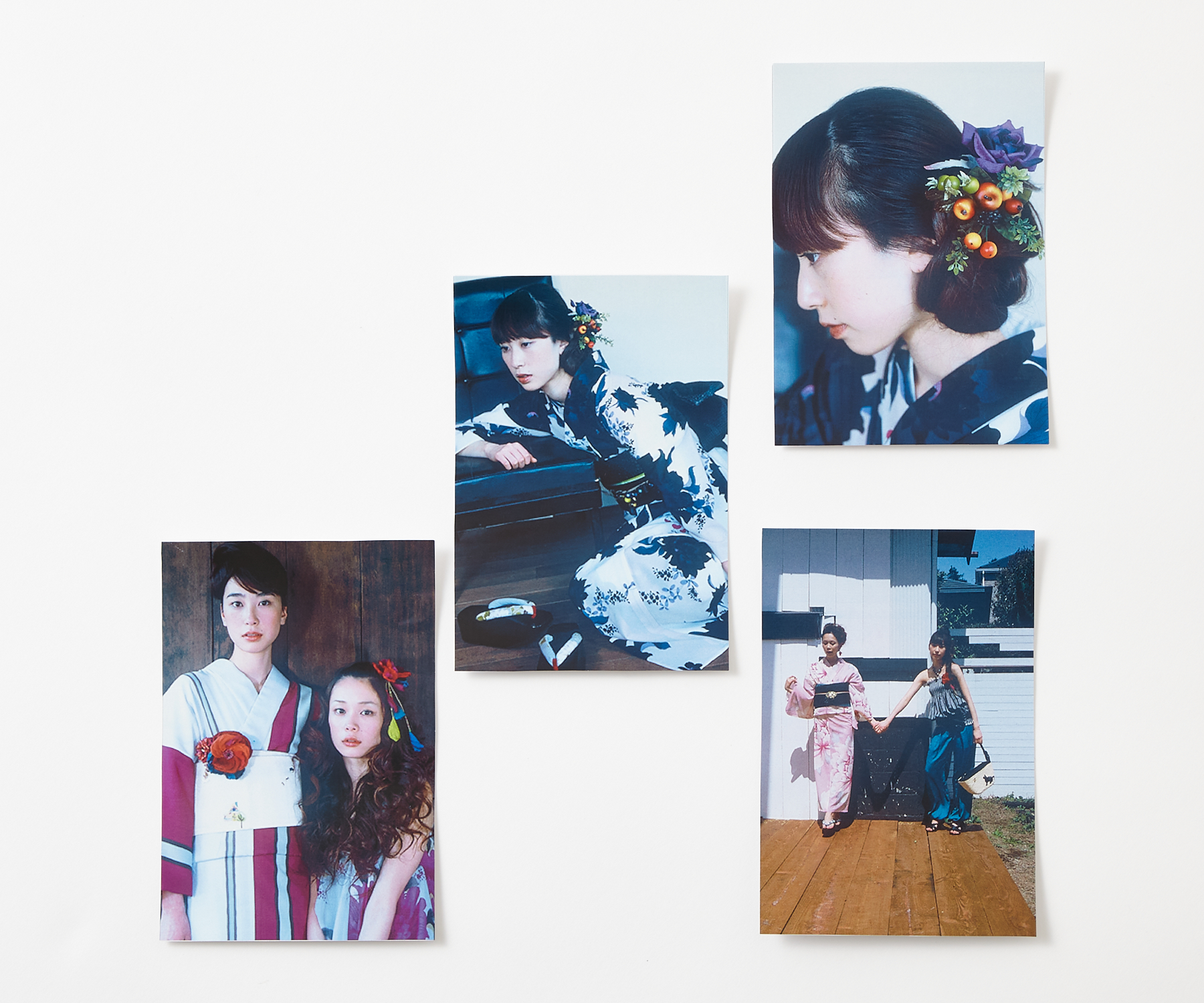 2007 postcard Taken with apparel and yukata

―I would like to ask you about the background behind the development of apparel with the same pattern as the yukata.
At that time, there were more select items for clothes, but if you develop apparel with the same fabric as the yukata, would it be more like Furifu? That’s why I started thinking about it. In fact, some people who were hesitant about wearing kimono said that it was easy to use clothes. As a result, I think we have created a “furifu apparel” that cannot be found at other stores. 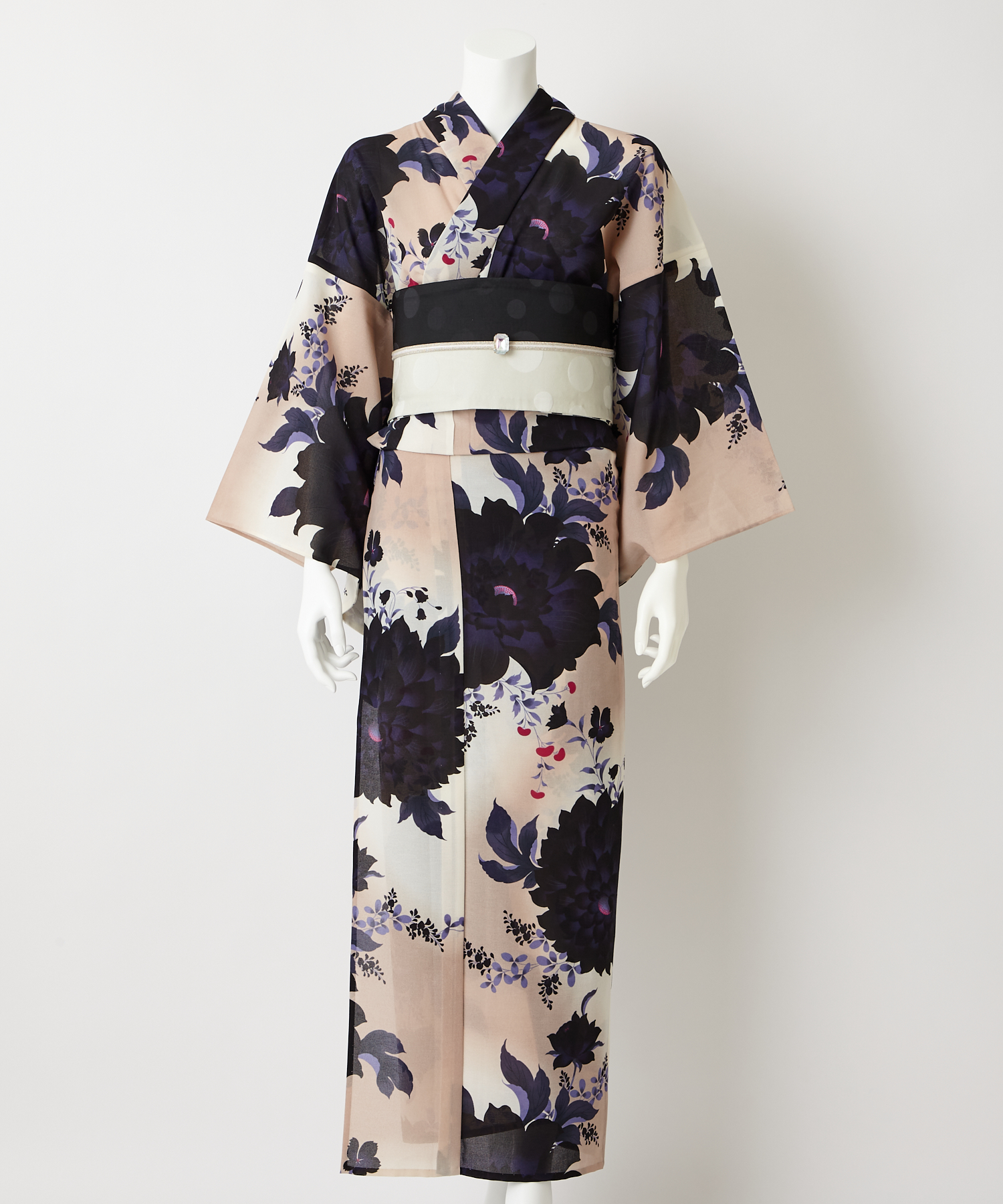 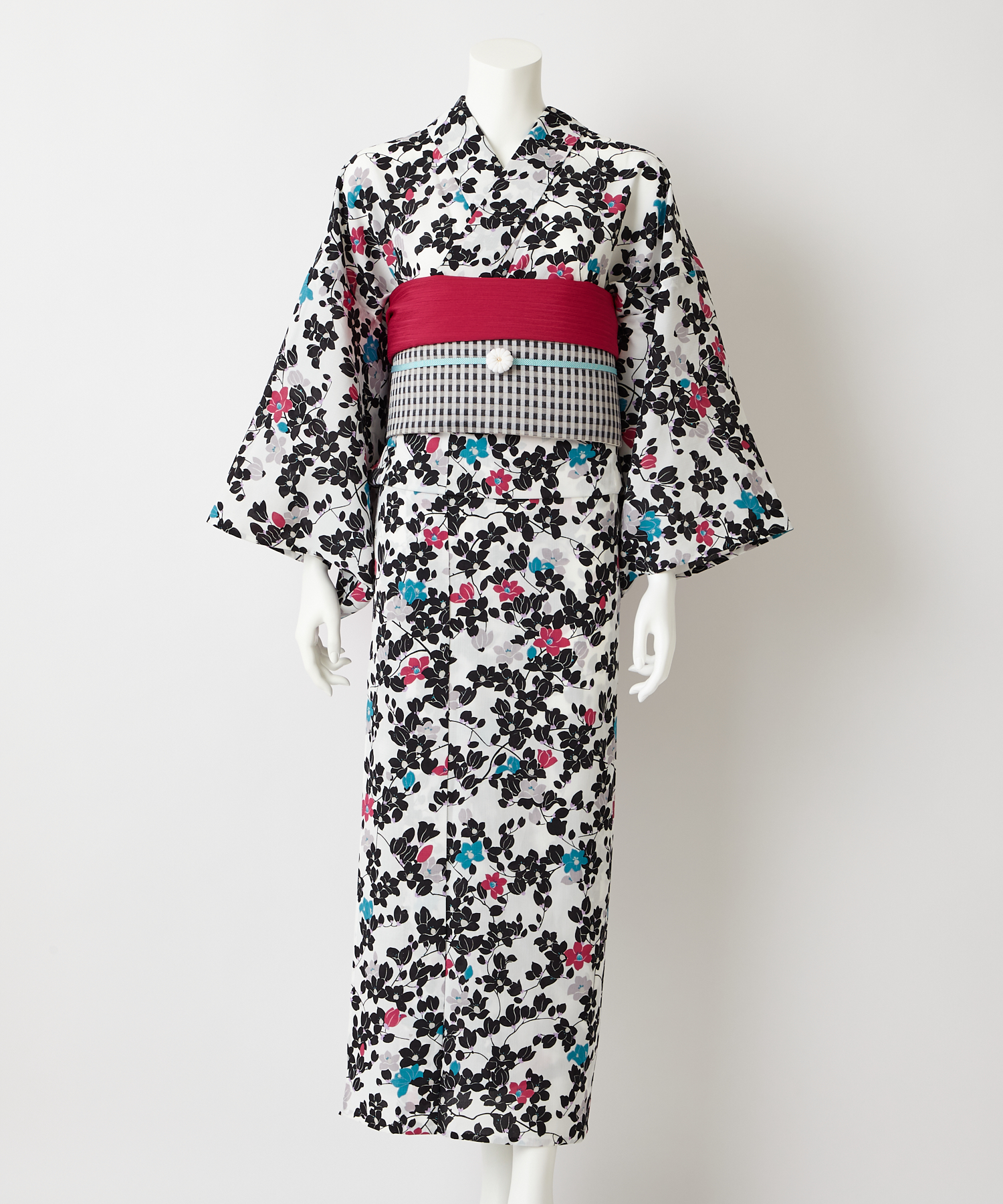 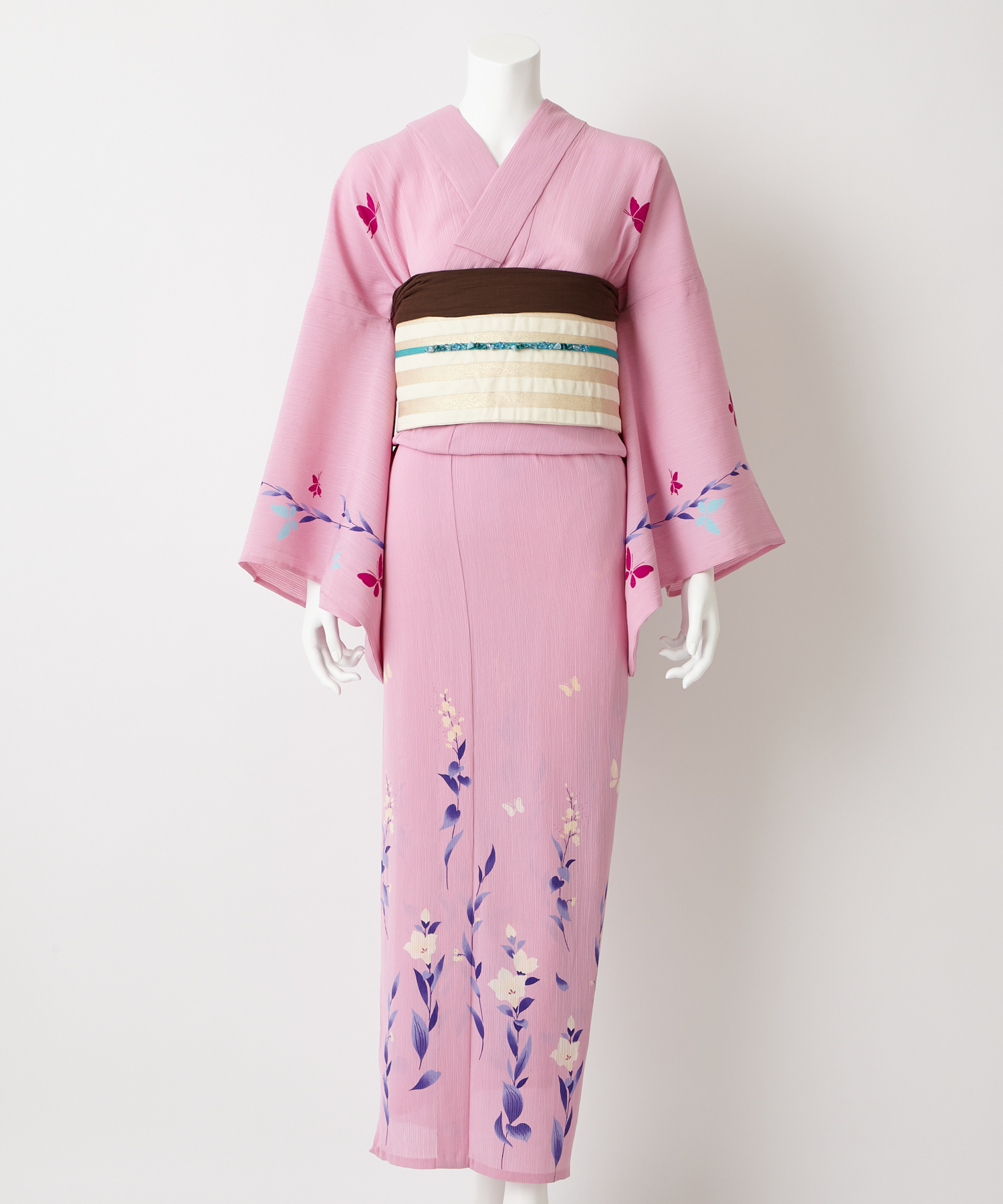 ― “Kaito Dally” is a popular pattern that will continue to develop apparel even in 2020.
I’m also surprised that it’s been 14 years since “Kaito Dally” was made. This design was created by adding a shade to the base color so that it looks more three-dimensional. I think that the point is that many people like the large dahlia and the color composition that looks nice, such as brown, navy blue, and purple, which are easy to wear.

2008 The world view of furifu that is conveyed visually 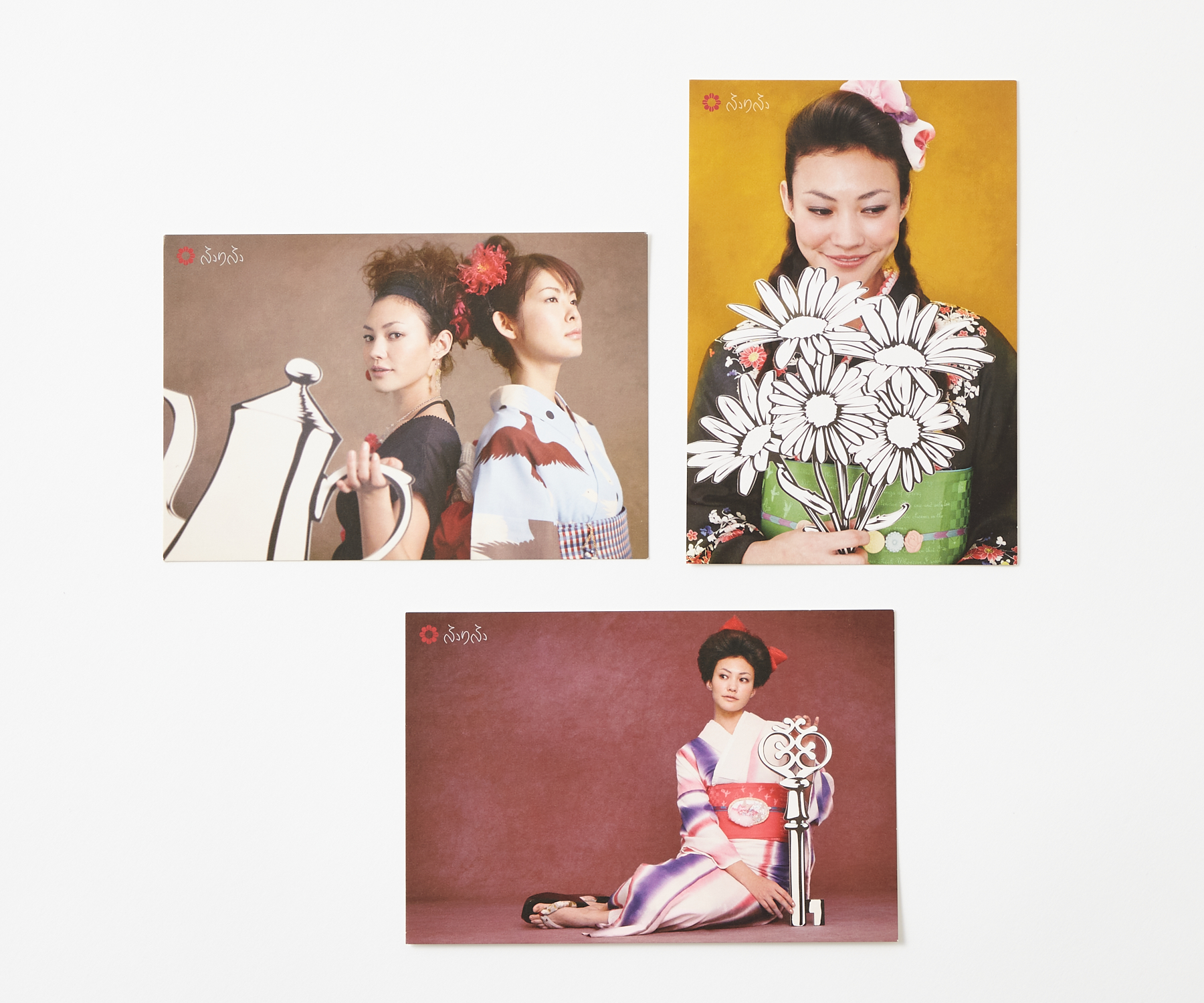 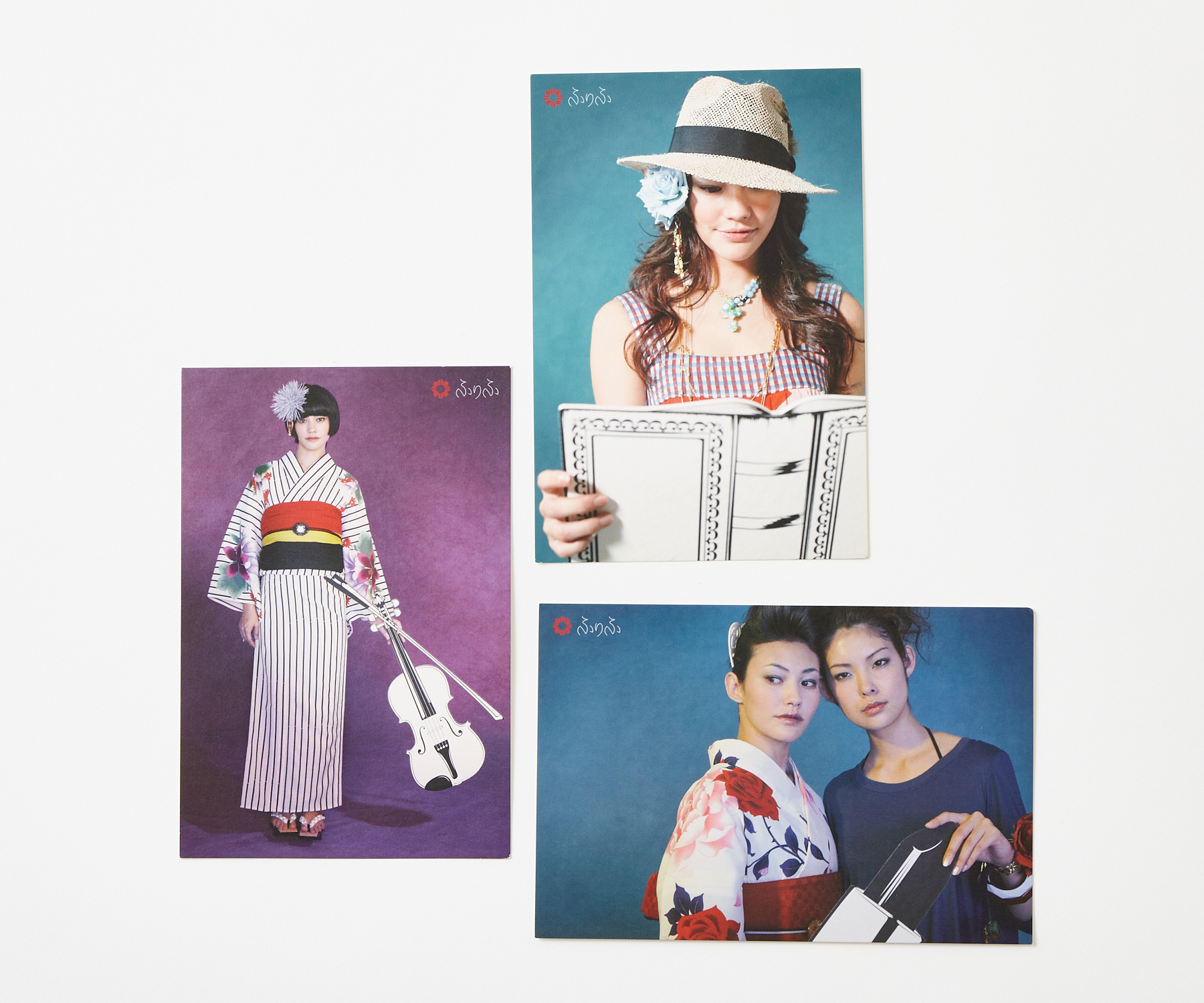 2008 postcard For a design with illustrations

-From this time, it seems that the appearance of the postcard has also become unique.
I started to focus on visuals because of the growing desire to further establish the world of furifu. Until then, visuals were an extension of my craftsmanship, but instead I wanted to give the idea that “Furifu should be like this” from the visuals. However, there are also photos in which the yukata pattern is not visible at all (laughs). I wanted to convey only the image, so I remember deliberately making such a structure. 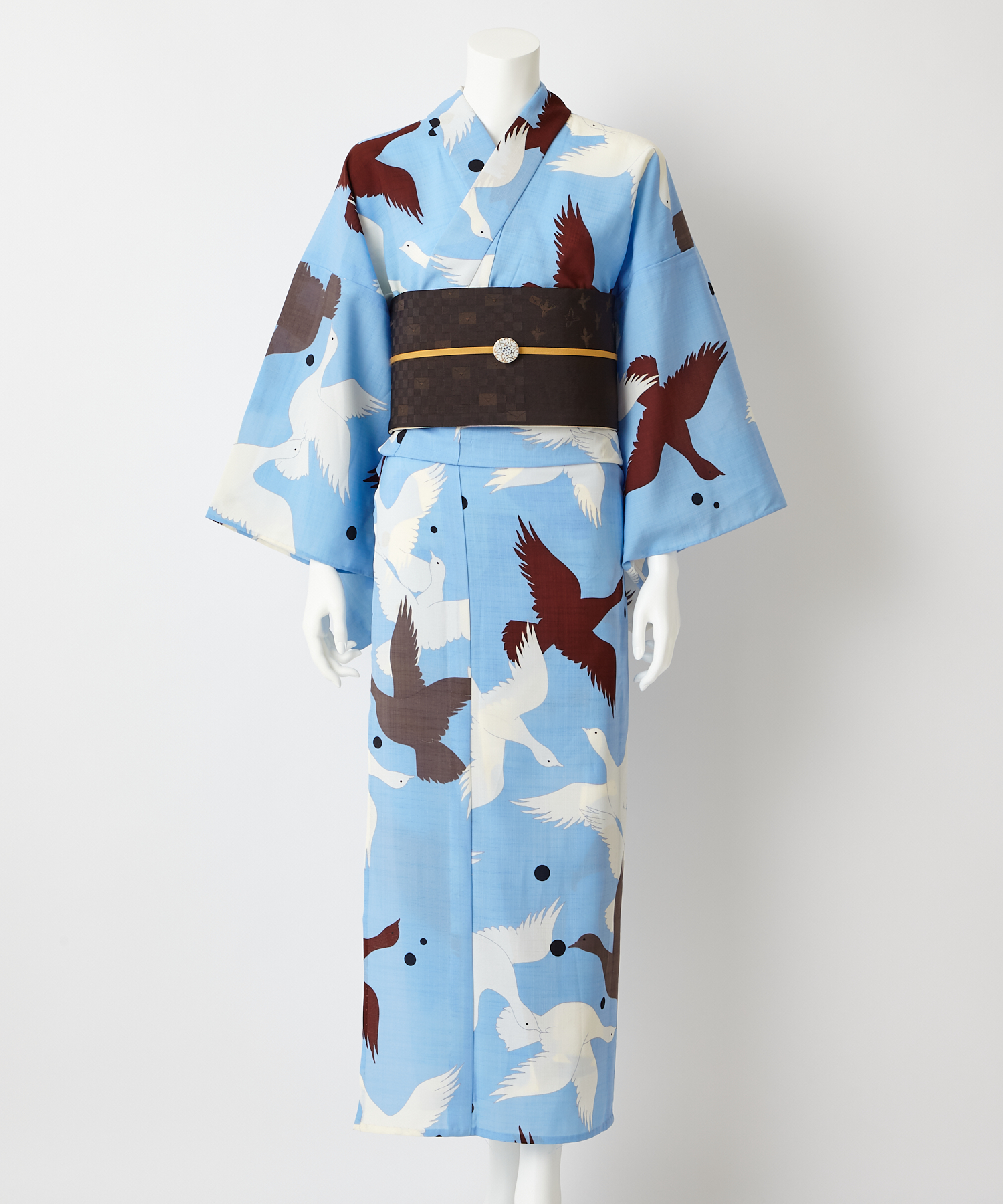 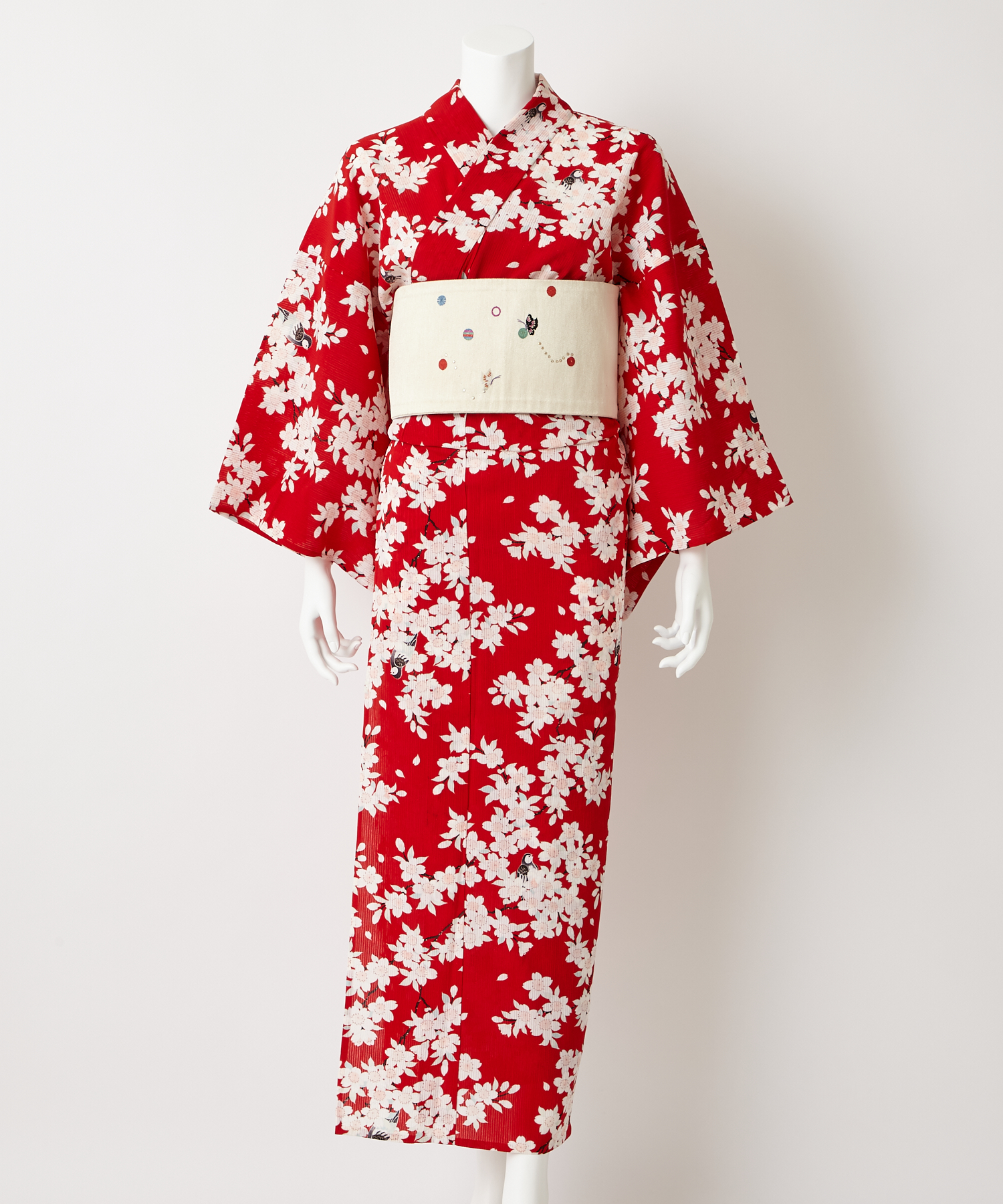 -A yukata with all the animals drawn is born!
I think that the cat was the first to be used as a yukata pattern, but the first one I put in the whole was “Love & Peace”. Since the face is important in the design of animals, it was difficult to balance the size of the eyes and the silhouette. And the point that I thought about with this yukata is that the pigeons are flapping vigorously. When placed as a handle, white animals give off a nice sense of clarity, and in addition to pigeons, white animals such as swans and rabbits often appear.

2009 Release of the first book, the first mook book 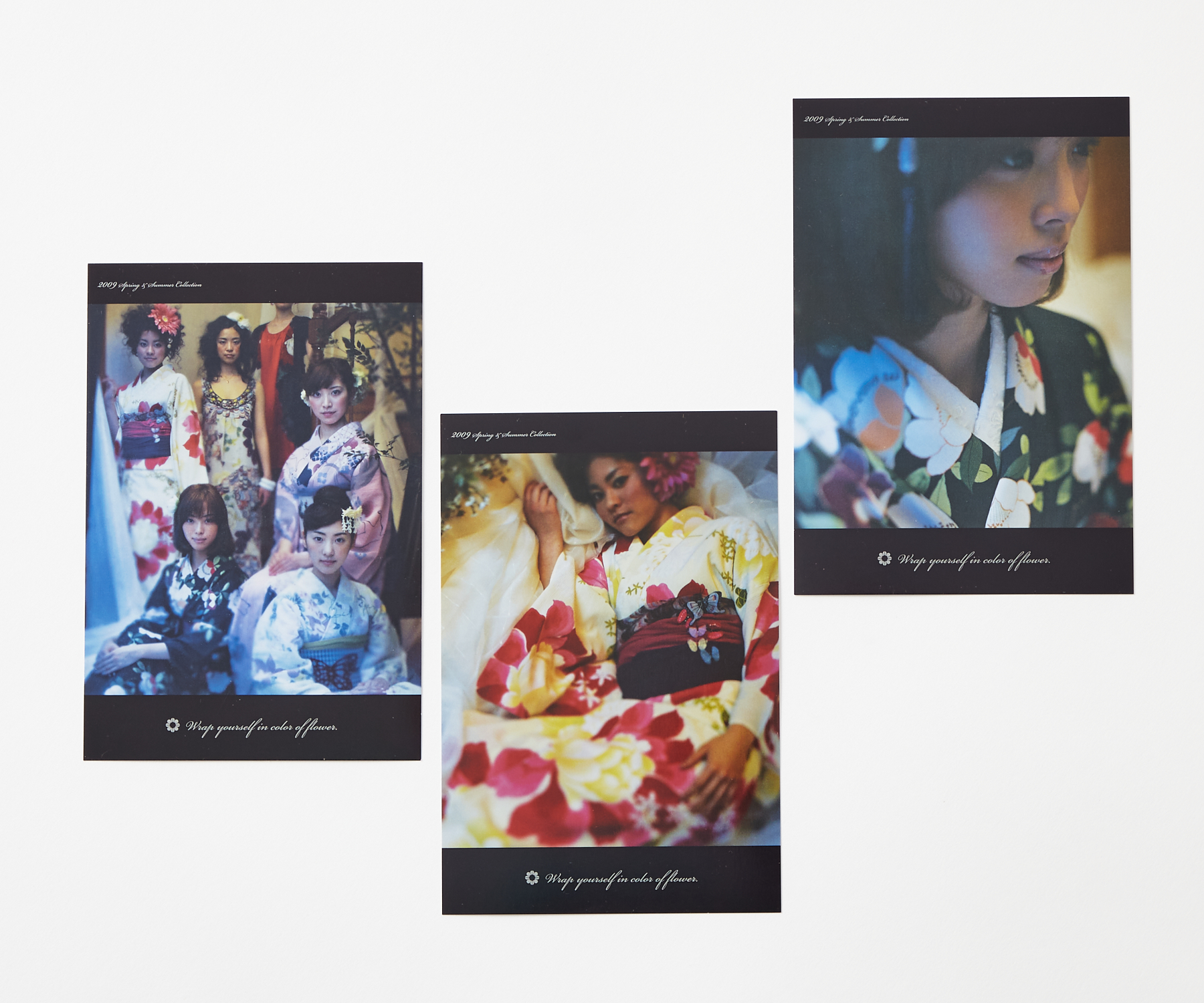 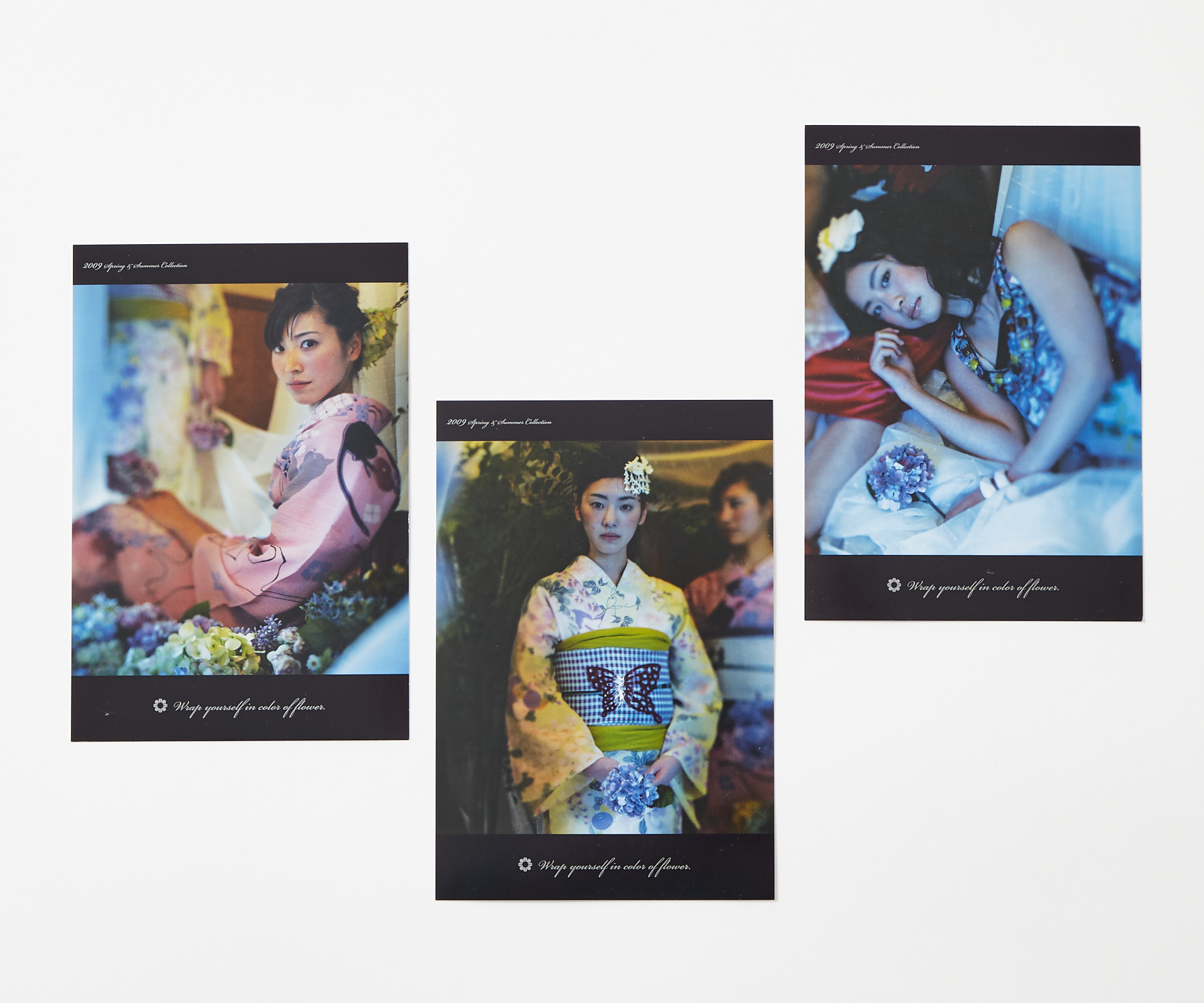 ―2009 is a season with many floral patterns.
Since the popularity of the big pattern increased from the time of “Kaito Dally” in the previous year, I was consciously making a big flower pattern every year. I think that it was during this time that the direction of furifu and the design that I was good at came into view. In “Furong”, a small ladybug is secretly drawn on a flower, and I like to hide such little fun. There are many hidden characters and episodes that look like “actually…”. 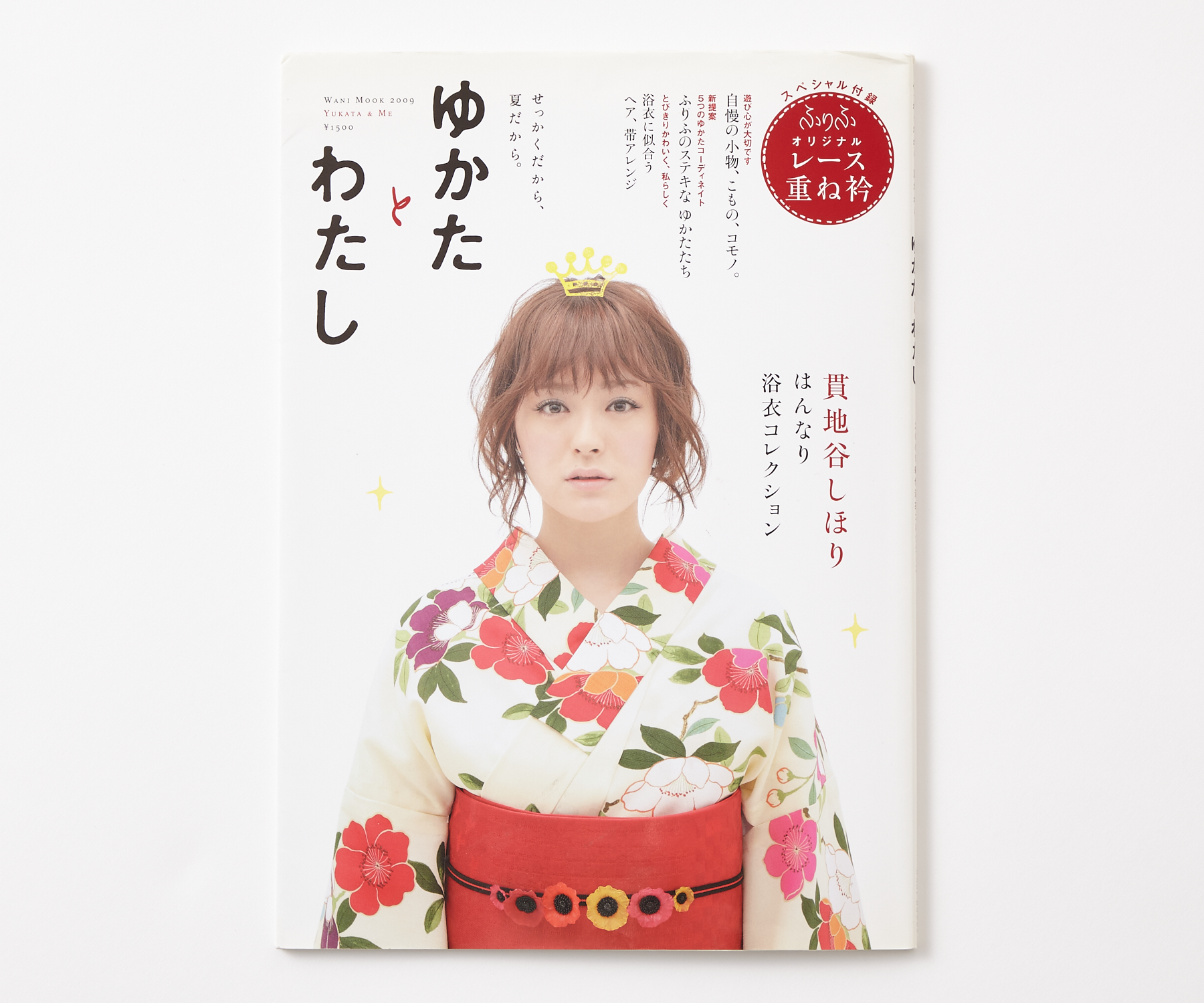 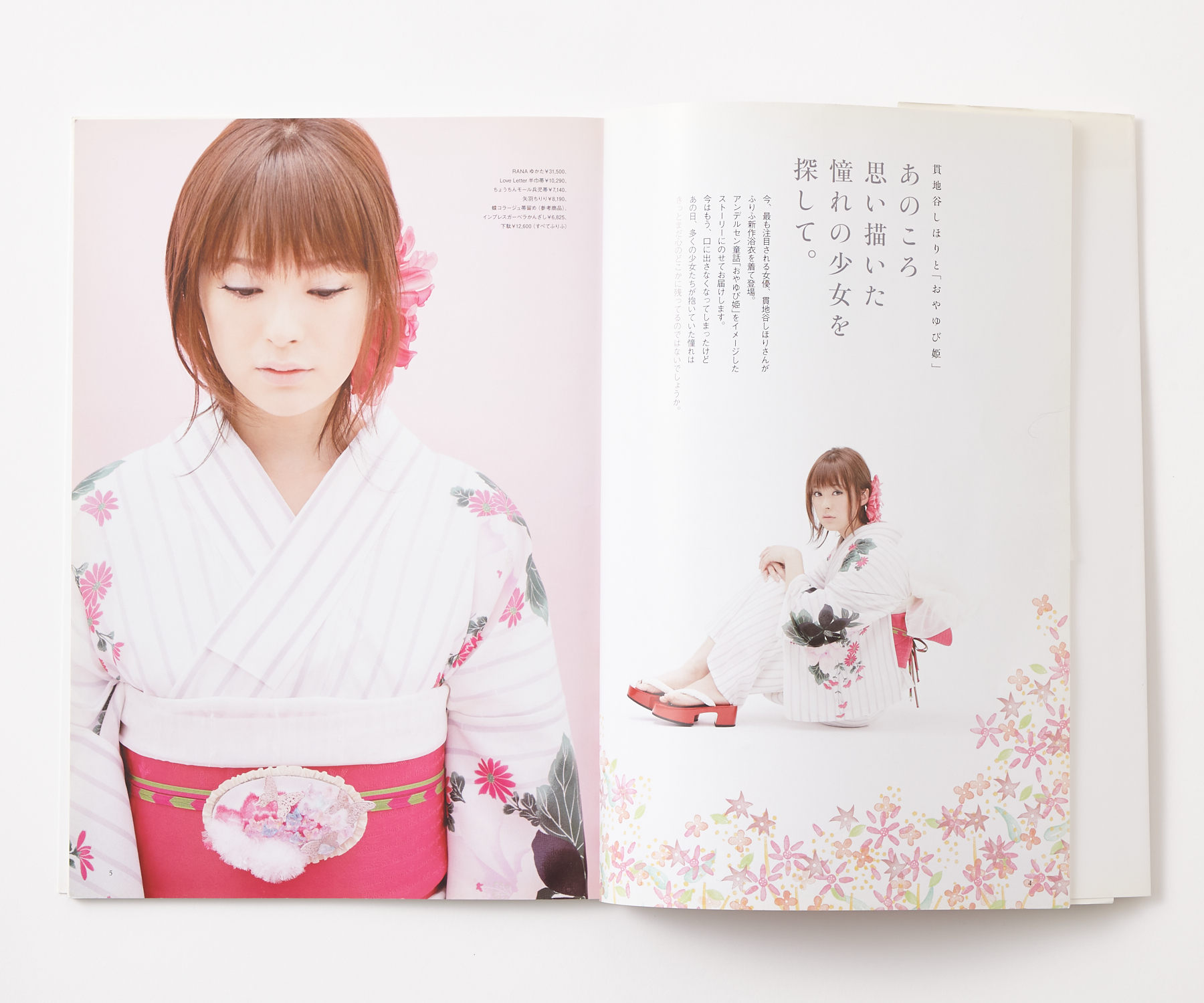 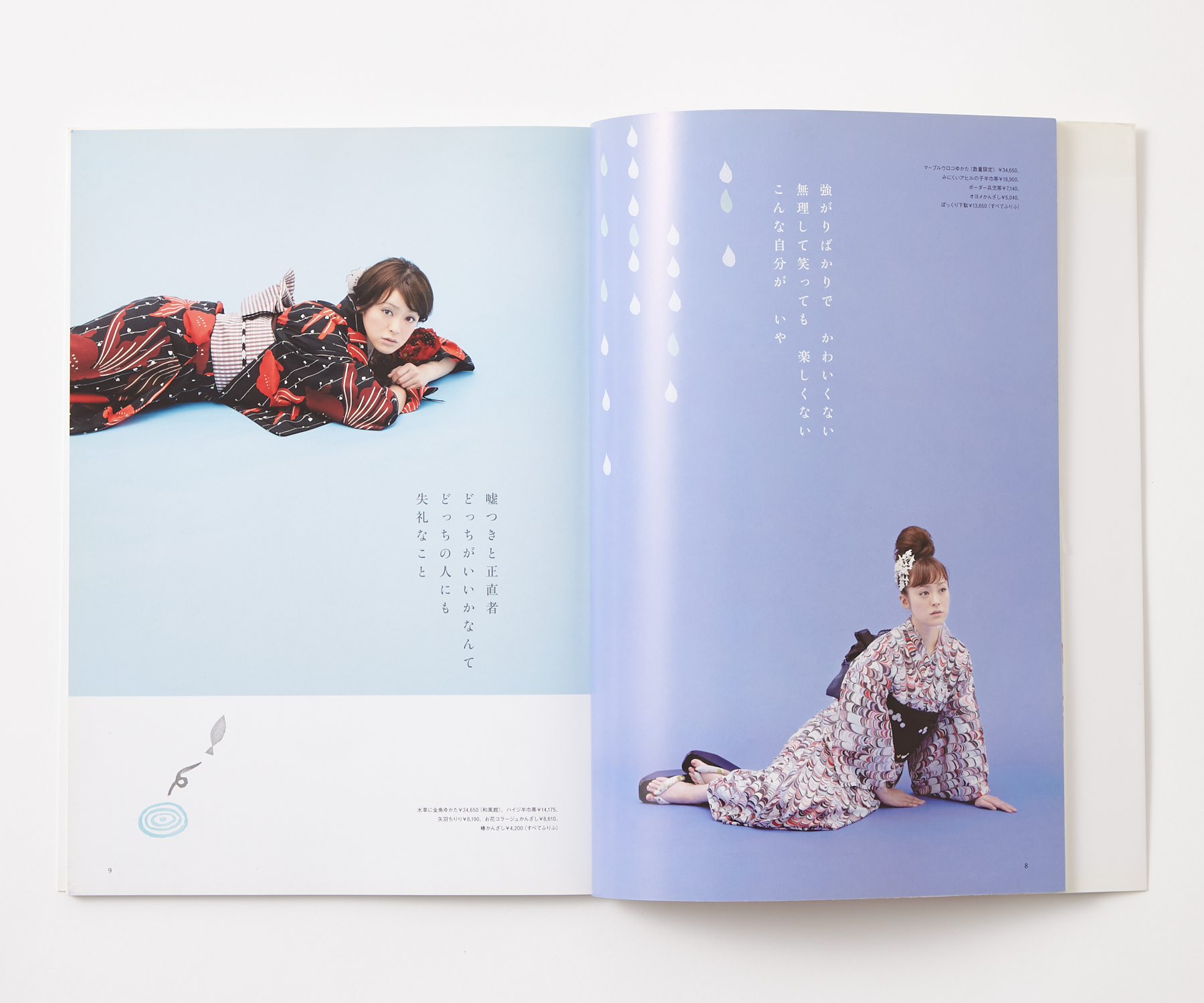 Mook book “Yukata and I”

-Please tell us how the first mook book was released.
When a staff member who worked at Furifu changed jobs to a publisher, he left the company with the promise “I’ll publish a book about Furifu someday.” That was the reality of how the first mook book was made. It’s a really handmade book, and the designs on the cover and front page are all made from handmade eraser stamps. Adding a lace half collar to the appendix was also a challenge at the time. This is a book full of thoughts that look cute even if you look back on it now. 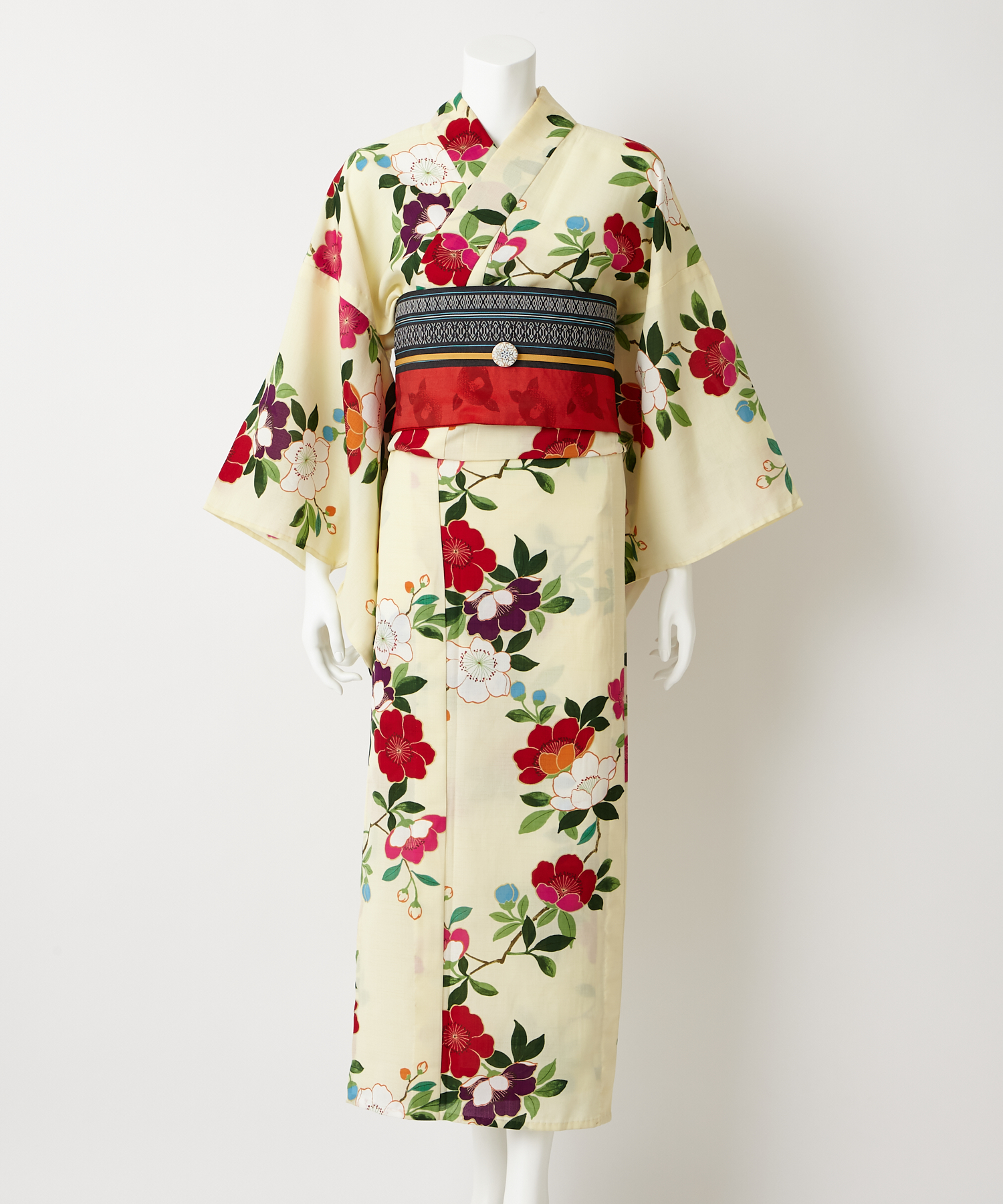 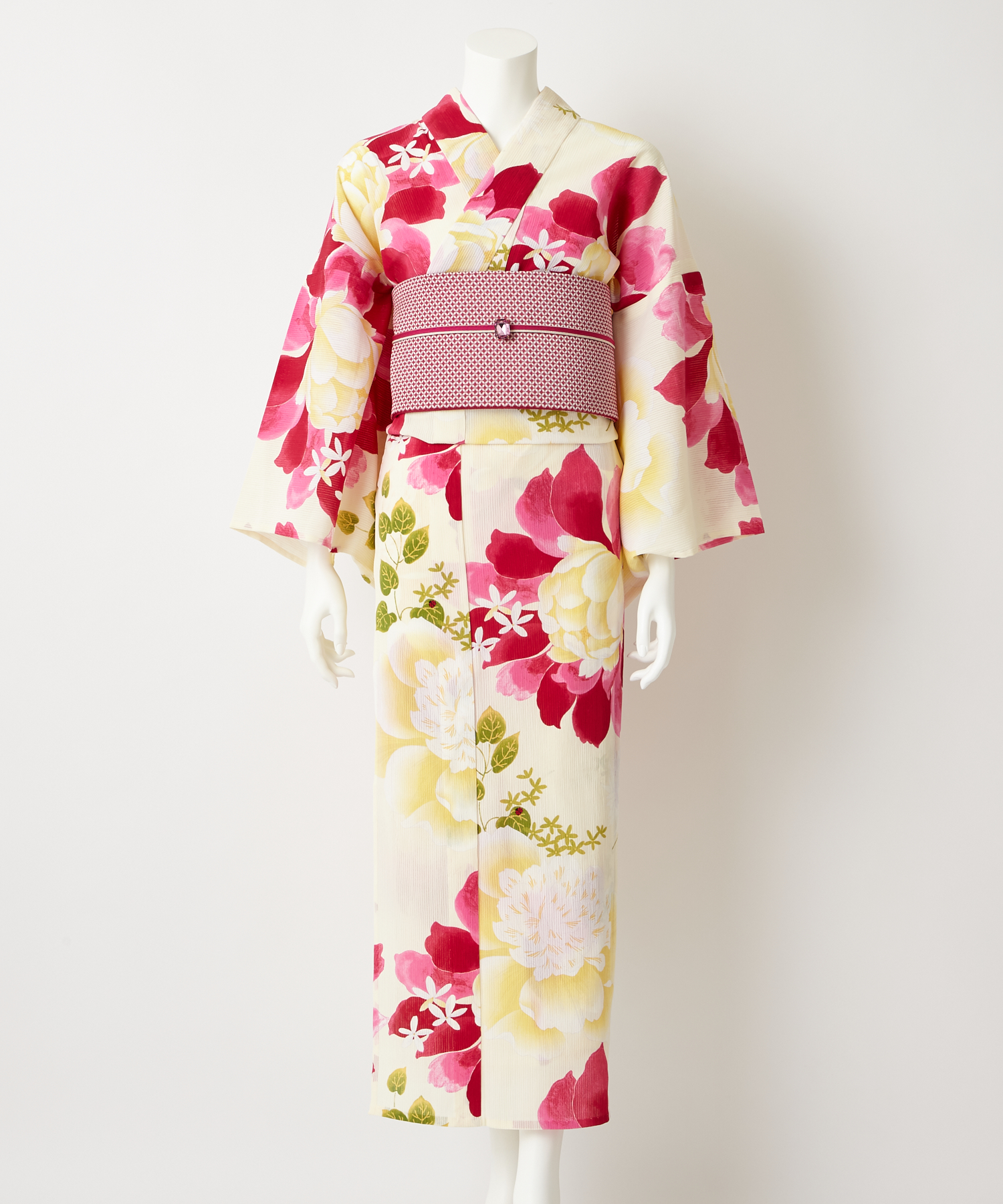 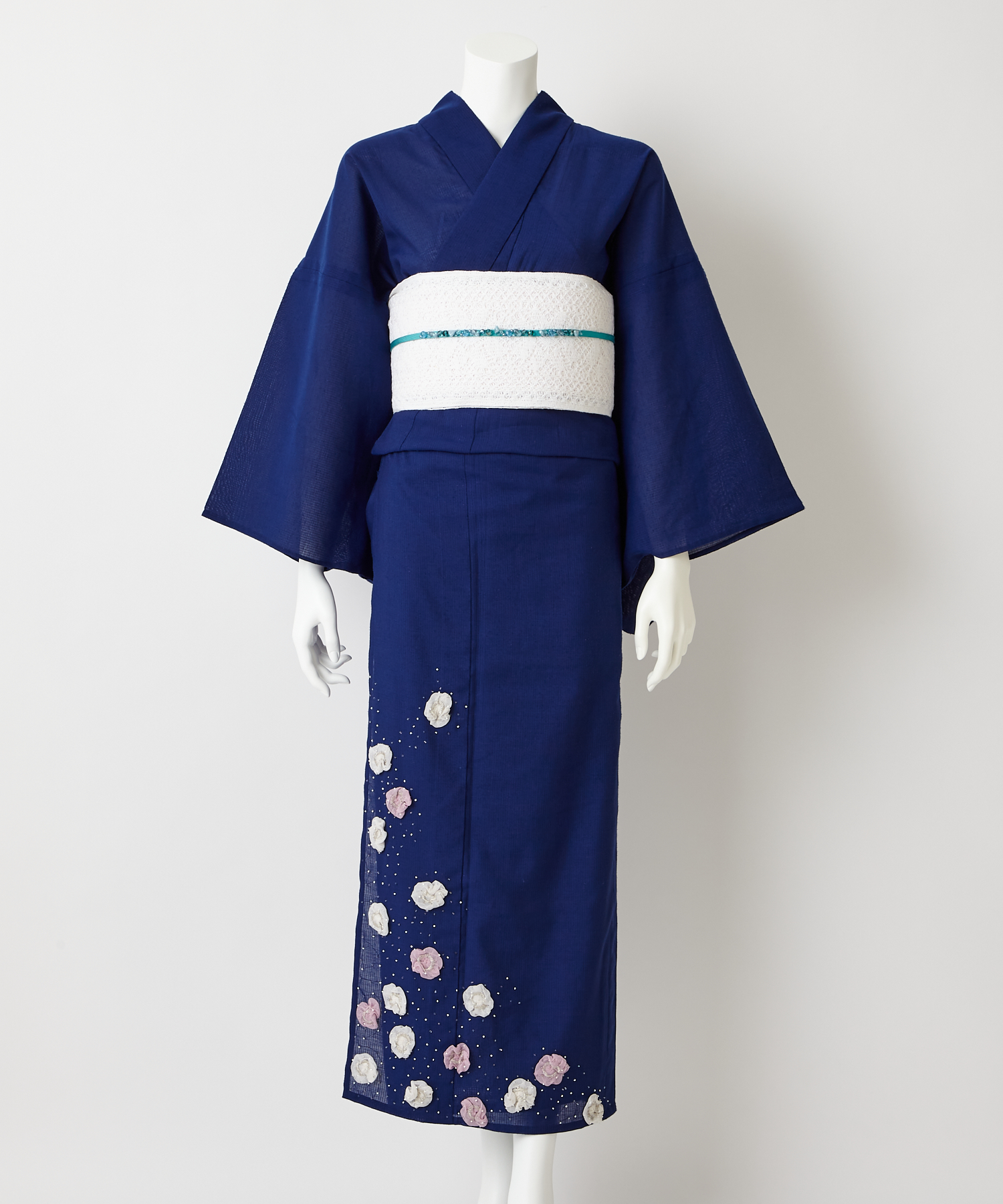 ―The “Stardust” with its three-dimensional parts is a very sensational piece.
This is a yukata that was born from the image of a blouse in clothes, and it was a work that I tried a lot of myself. I asked the sew shop for yukata only to sew, and then had the sew shop for clothes finish it by hand. Therefore, the quantity was limited, and it was an extremely limited item that could only be worn in 20 pieces. It’s a work that can’t be imagined nowadays, but I think it was a good finish.

For the past 5 years, you were still in the process of forming a “furifu”. I think it was a time when I was trying a lot of things, such as having just created a brand, and releasing original yukata and clothes. Looking back now, I felt that this time was the basis of the furifu.
Next time, we will deliver 【Collection/2010-2014】! looking forward to.
We will carry out a popular yukata popularity survey on Instagram. Yukata selected as the first place may be reprinted next year! ? Please join us as well.