Ayako Nagahashi, director who has created numerous hit works since the opening of Furifu since the beginning. I will remember the footsteps of “Furifu” from 1999 to today with her memory.

【Collection/2010-2014】
For the five years from 2010, we will release two books as a chance to gain a broader understanding of the existence of furifu. It was also a time when the possibilities of furifu were expanded with the participation of creators from various fields. We will talk about five years of intense density that further pursued “Furifu-likeness”.

2010 Girly and sweet, the arrival of the maiden season 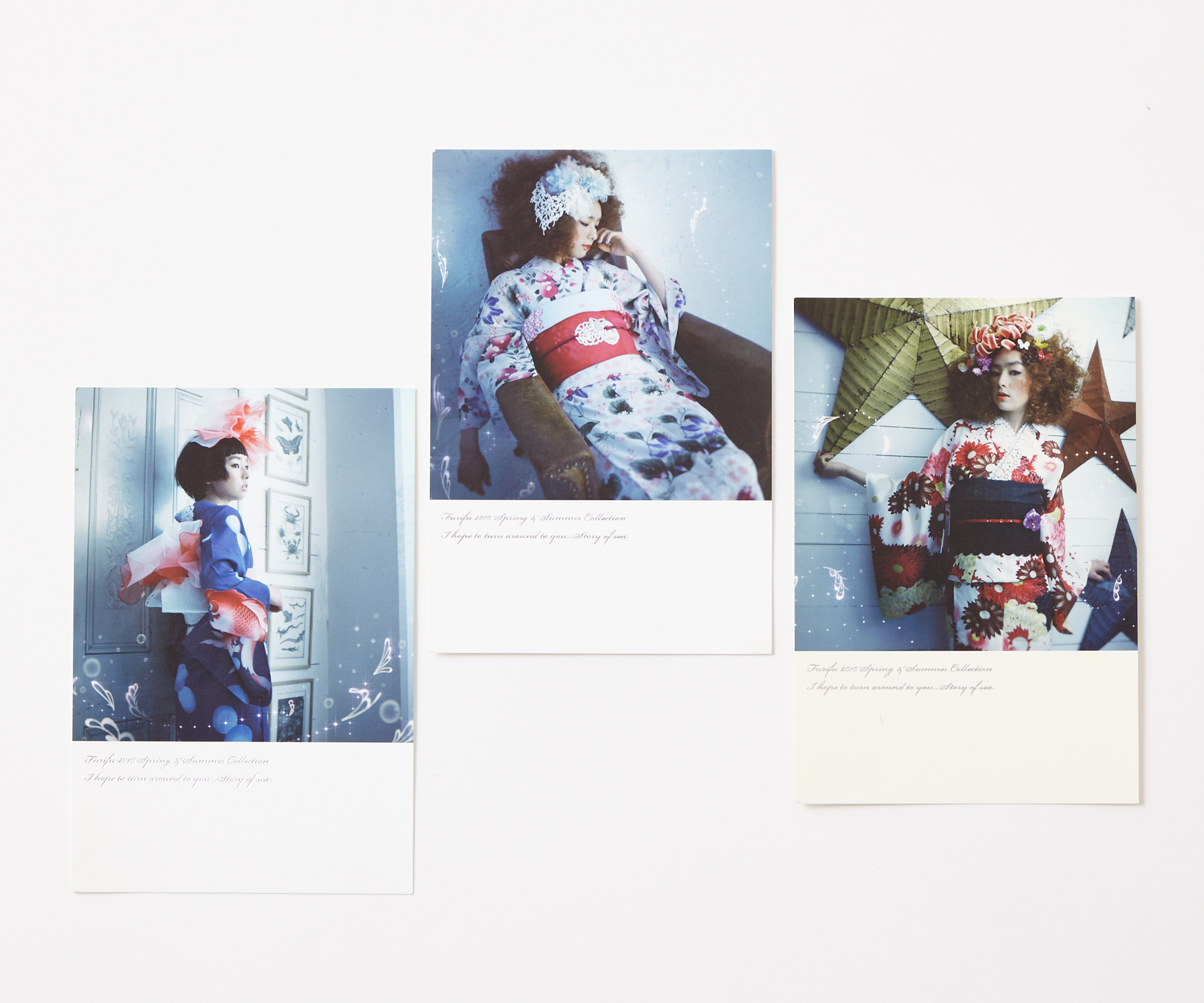 ―I think the Japanese and Western elements have become stronger, but did you have any intentions?
Looking at only the yukata, it’s a design that is quite Japanese, but it’s a season that adds a Western taste with styling. By arranging and winding a fabric dyed with a hem band on the model’s head, and using a layered lace collar, I aimed for a strong styling with a girly element. At this time, there was still a flow of antiques, so I was incorporating Western-style items such as lace belts with a sense of furryness rather than ordinary Japanese style styling. 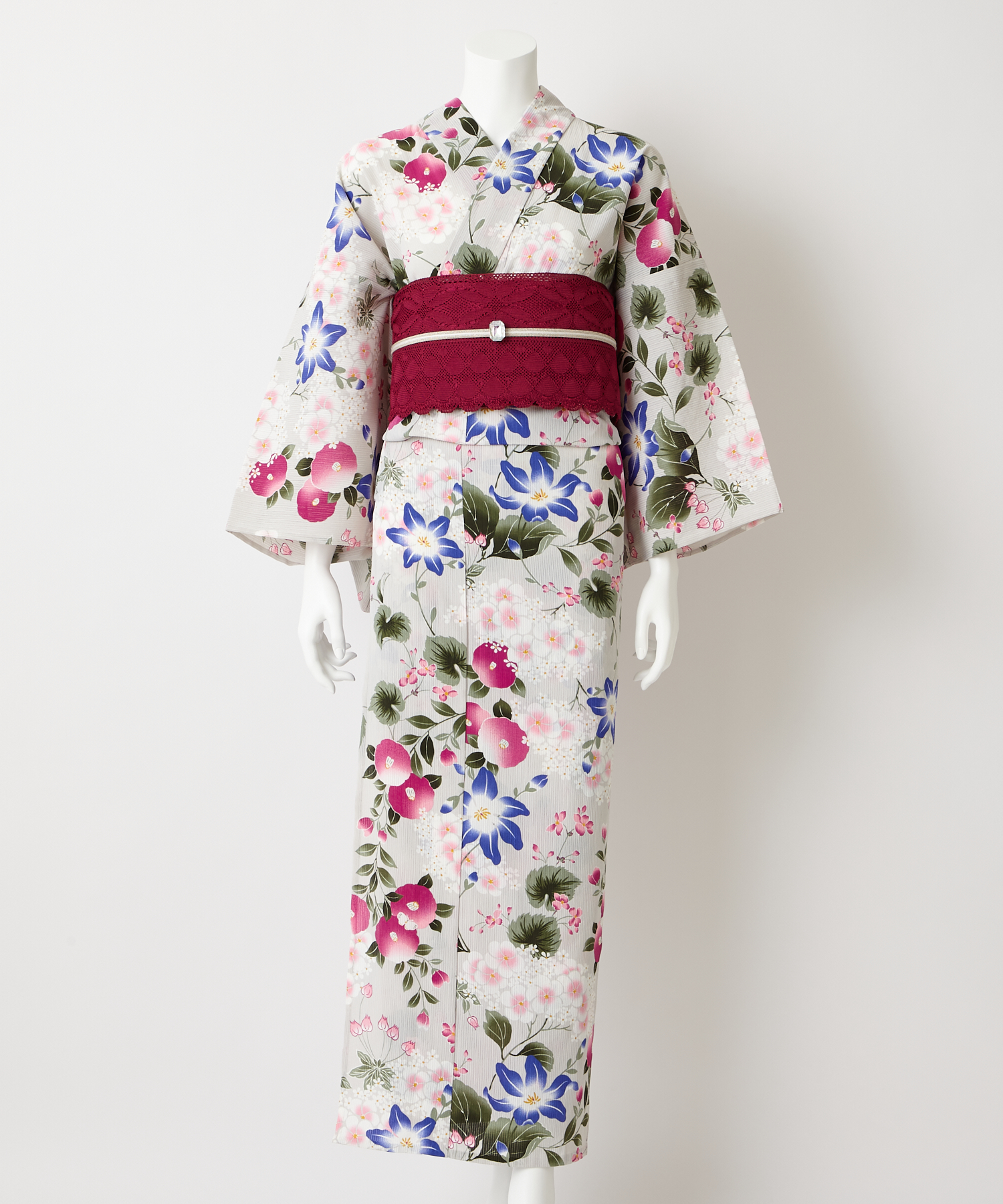 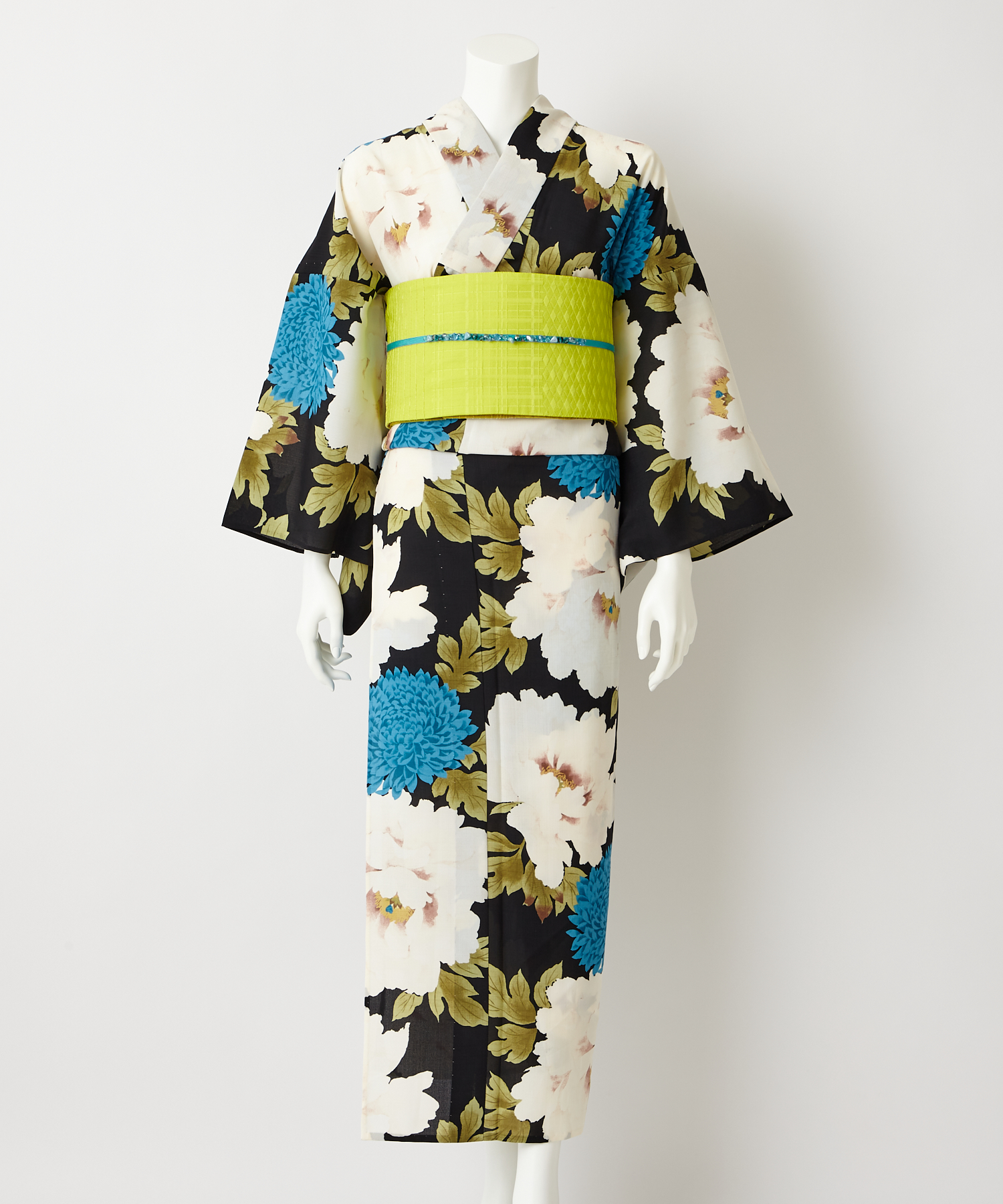 ― There are many bold patterns in 2010, and it’s finished in an otomatic way.
When I designed “Setsunajisai” and “Cogaretta”, the theme was “Romantic”. The heart-shaped leaves depicted in “Cogaretta” are in a charred color, meaning that they were burnt due to love. I have a composition of “happy mood”, and I think that it was a season of high tension as a result of expanding the image and designing it.


2011 Design source is my mother’s story 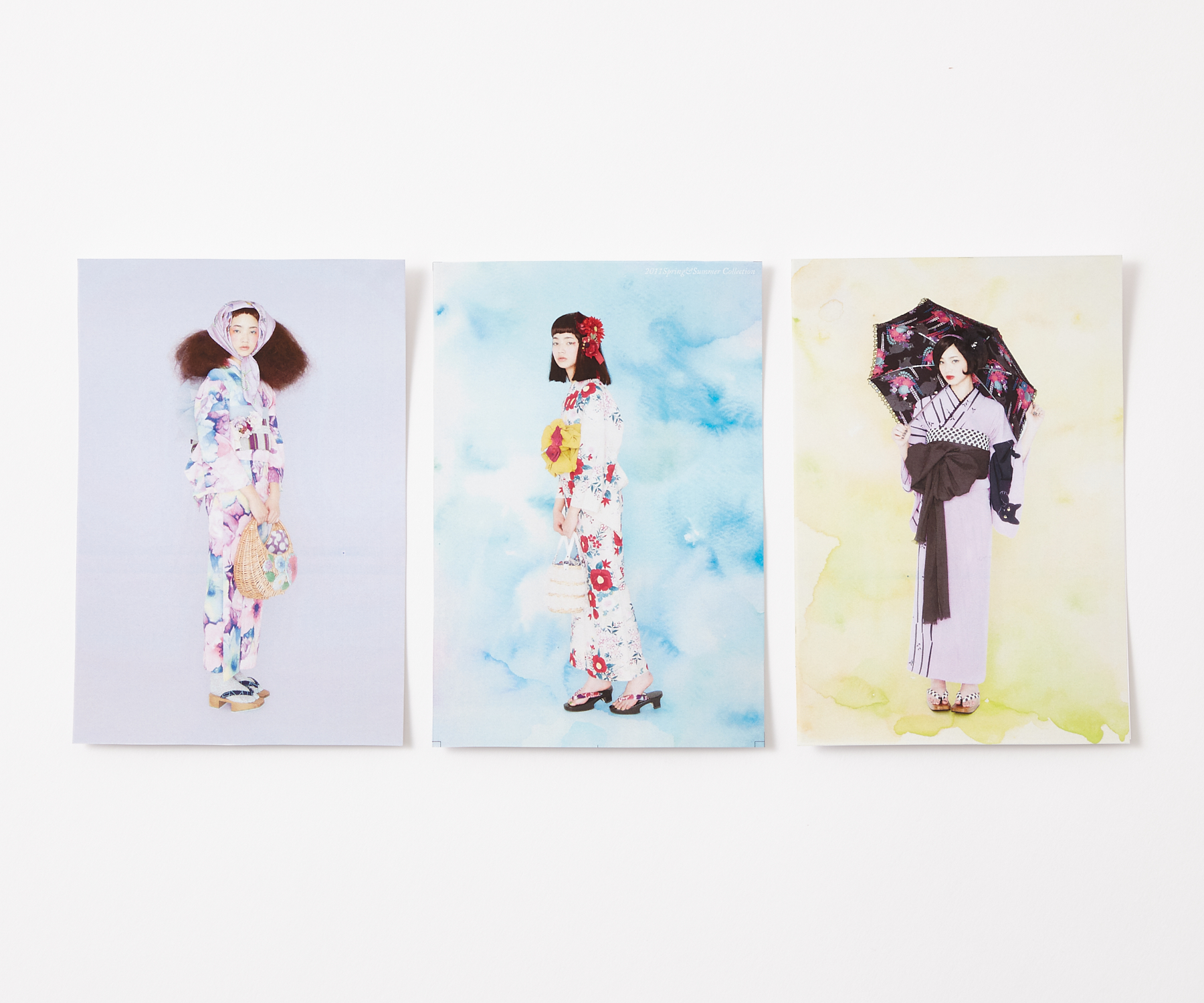 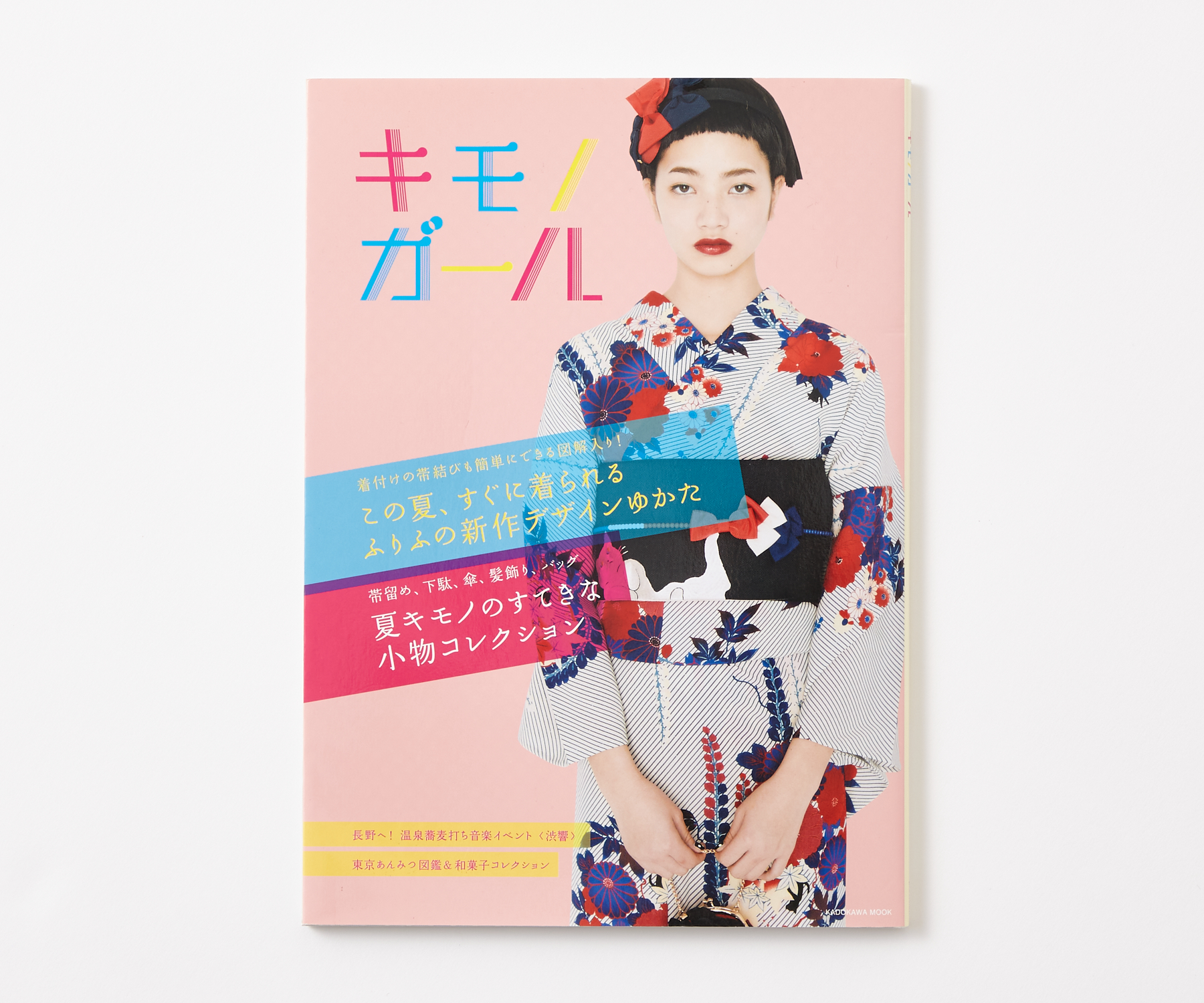 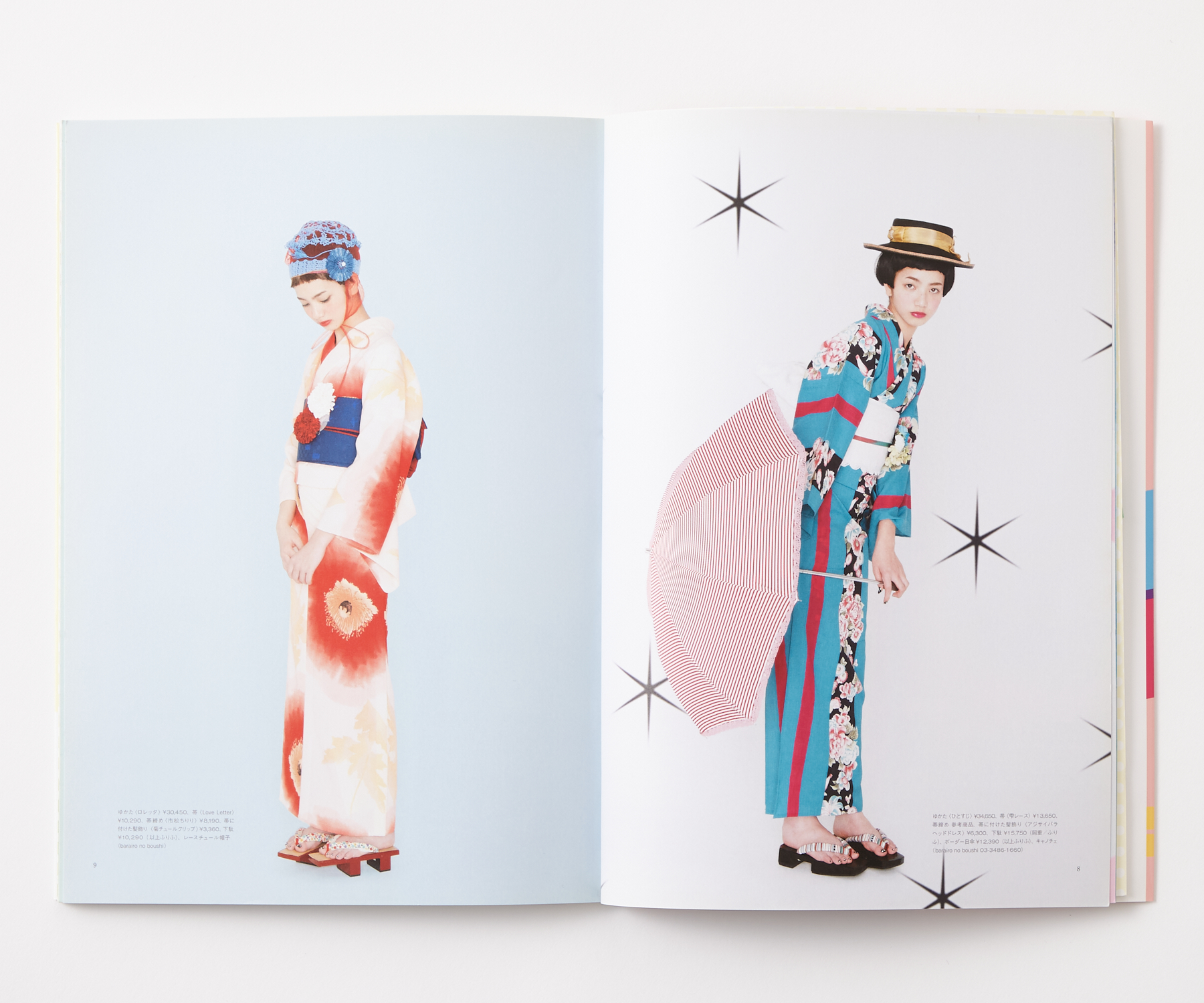 ― The second Mook book is on sale!
I wanted to make a new book because I wanted to give a more outlook on the world of furifu, and because I wanted more customers to know about it. I’ve been asking Miki Aizawa for styling since the release of this “Kimono Girl,” but I think the new power of Aizawa’s styling has added to the power of the furifu. This is a book with more individuality than ever before. 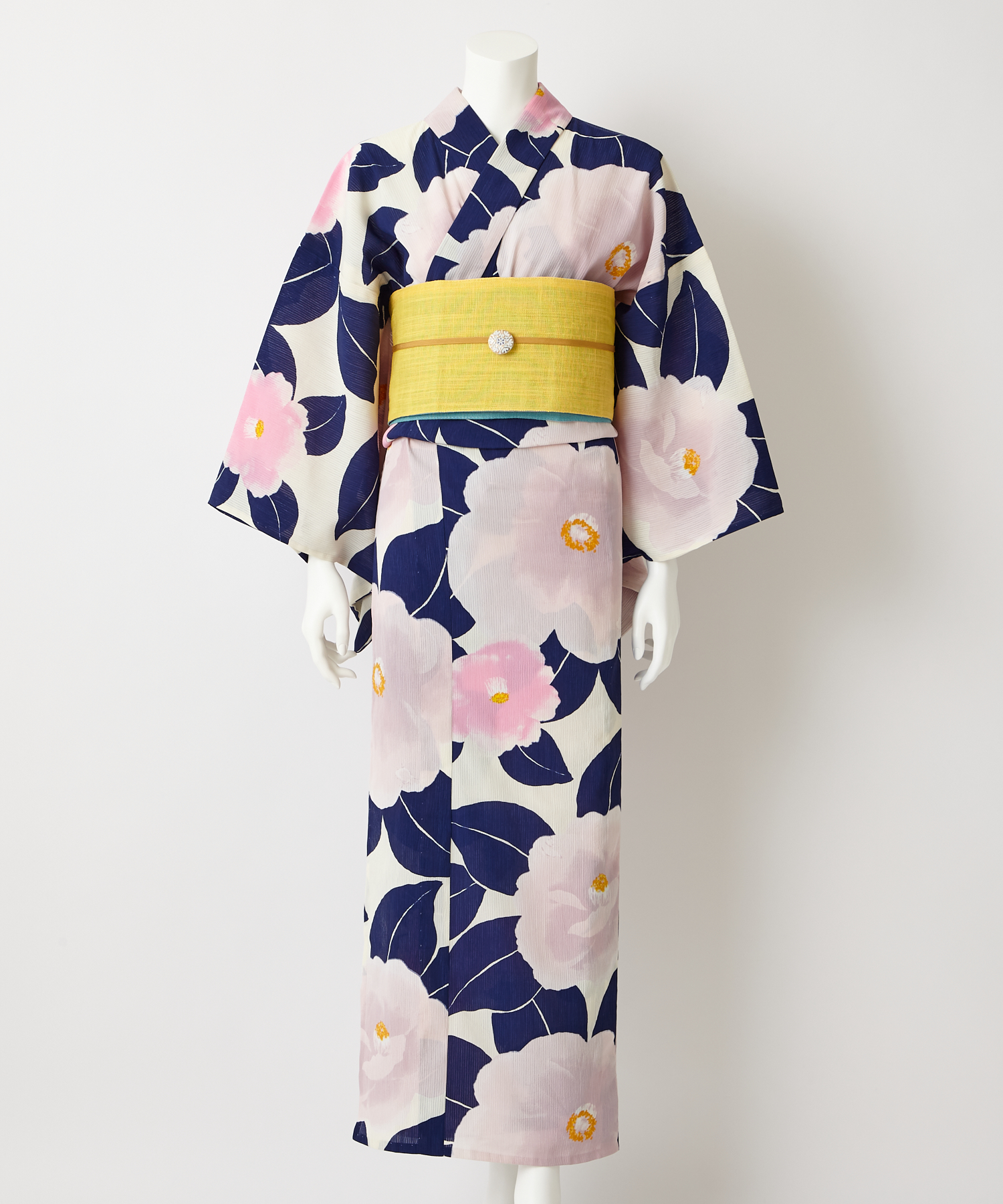 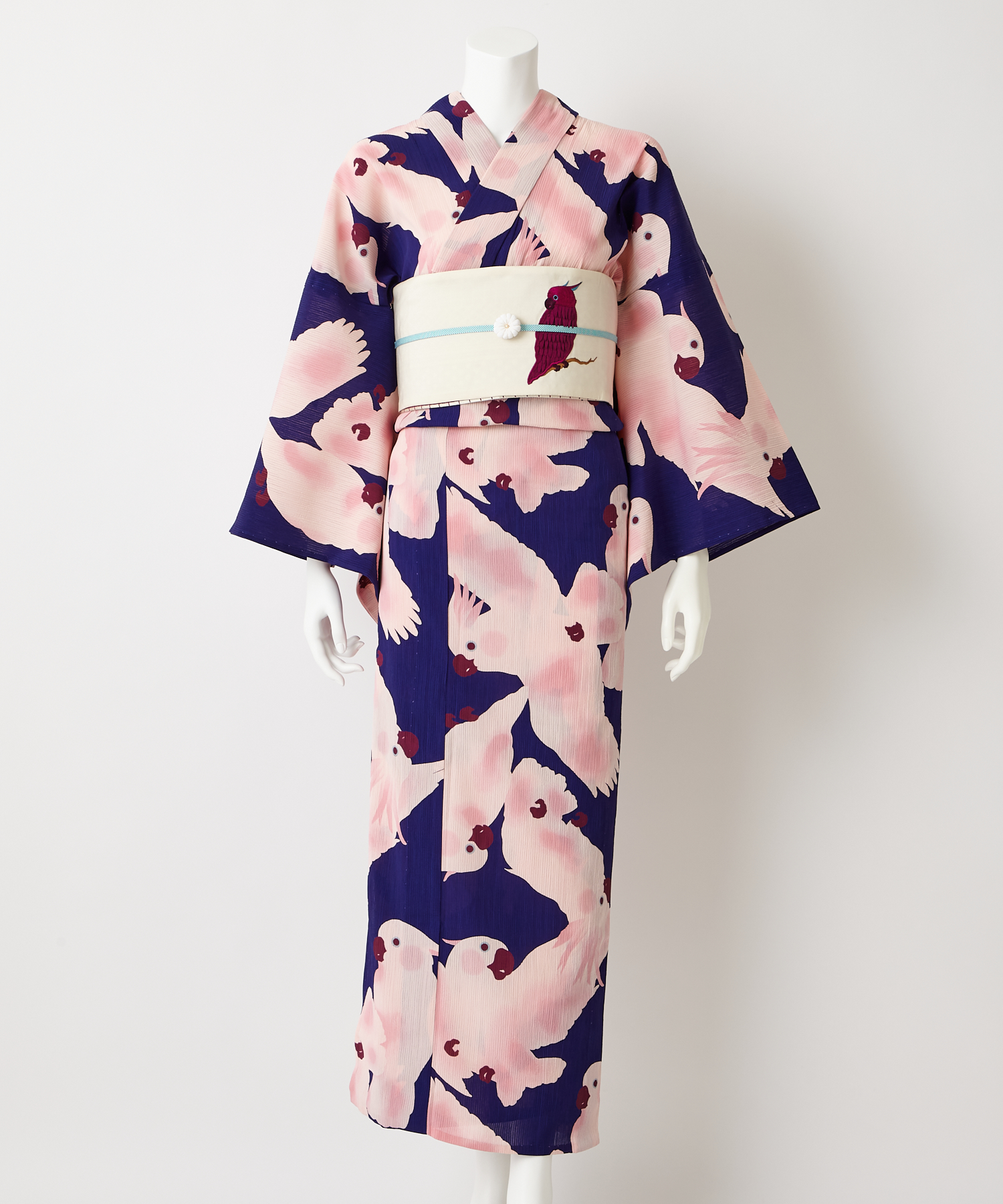 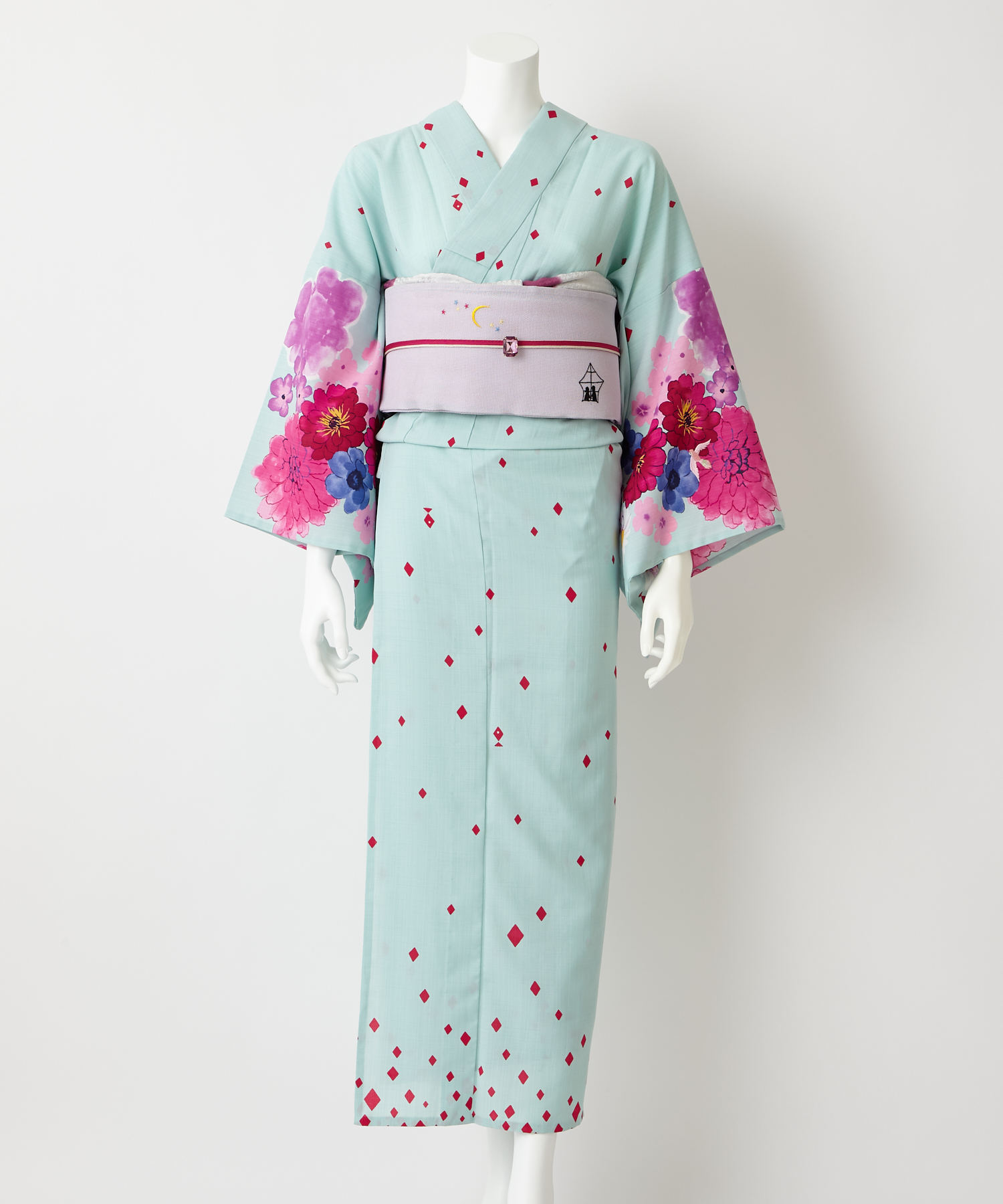 ― How do you create the theme for each season?
While thinking about trends, we are also thinking about universal Japanese culture and traditions. Trends and traditions are contradictory, but I think that gives rise to Furifu’s uniqueness. When I was a kid, my mother’s story was told by my mother when I was a child, and I’m always thinking about how we can put the story into a design. There is a desire to finish kimono and kimono in the story, dramatic yukata and kimono no matter which scene is cut out.

2012 Catalog updated with the times 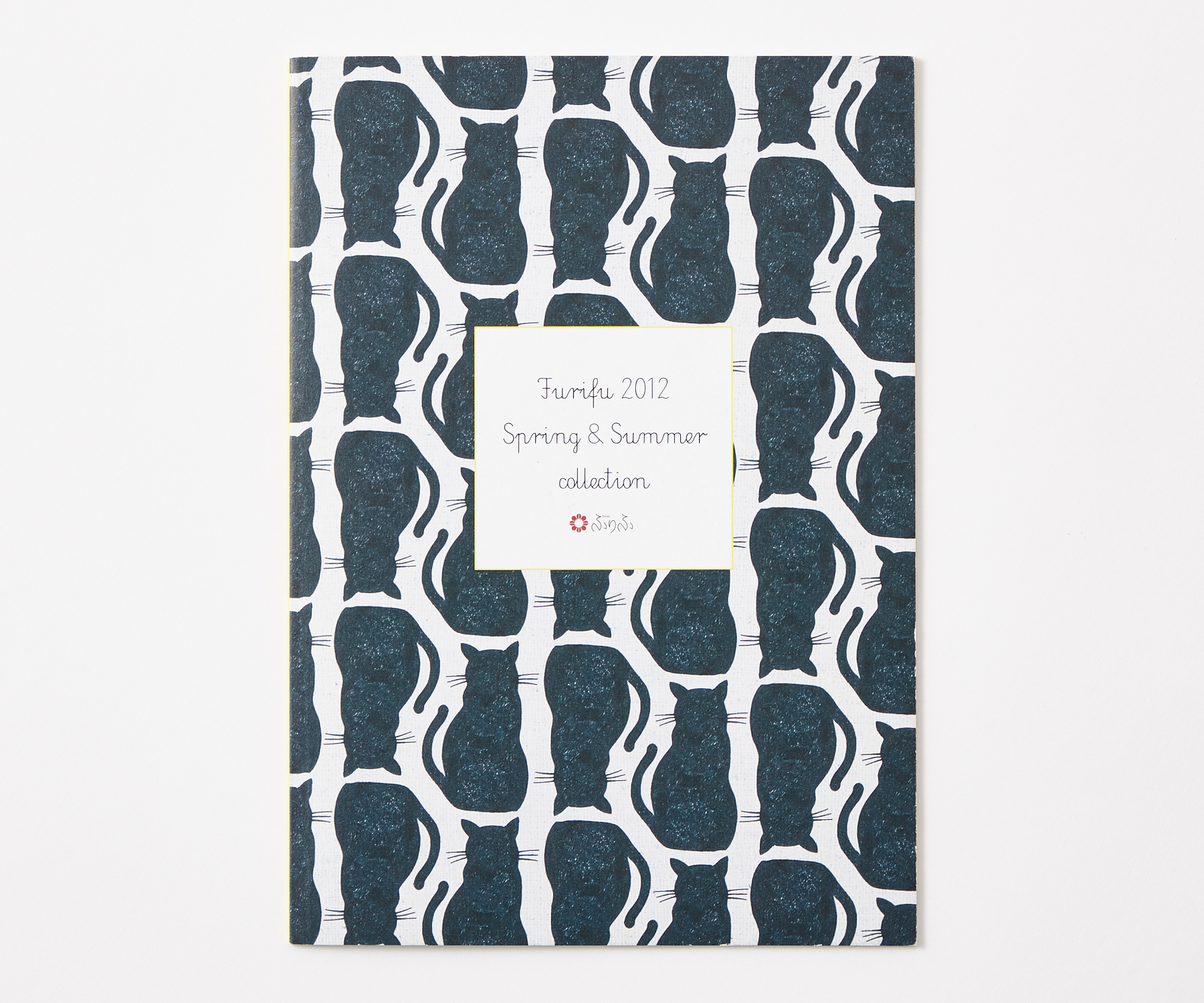 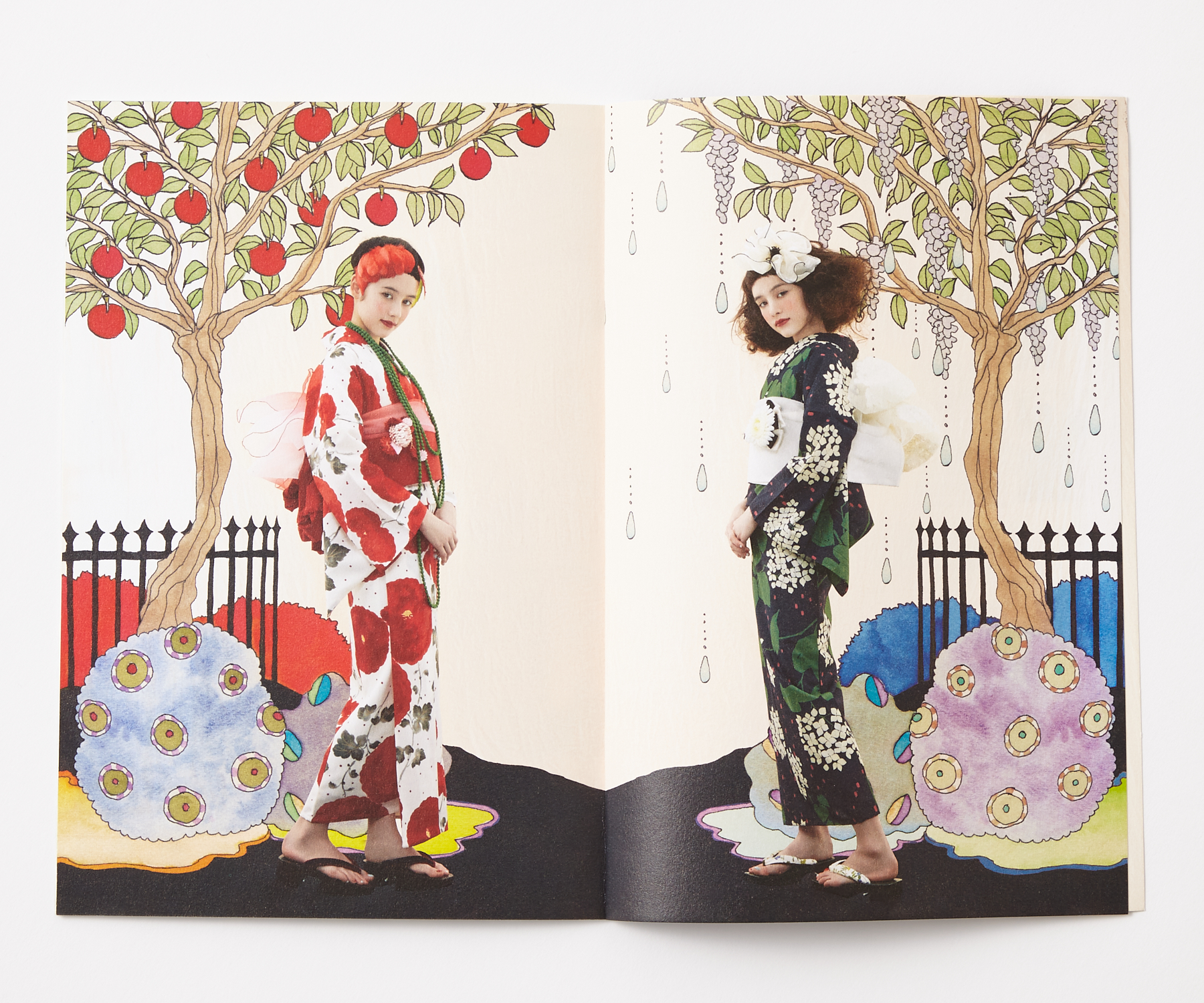 ― Changes in catalogs, from postcards to booklets
What I was conscious of when making the booklet was the production of a highly complete catalog that conveys the world of furifu and makes customers want to take it home with them. This season’s favorite is the last facing page. I like the wonderful illustrations drawn by illustrator Haruka Tachibana and the models that match perfectly, and the page is full of stories. 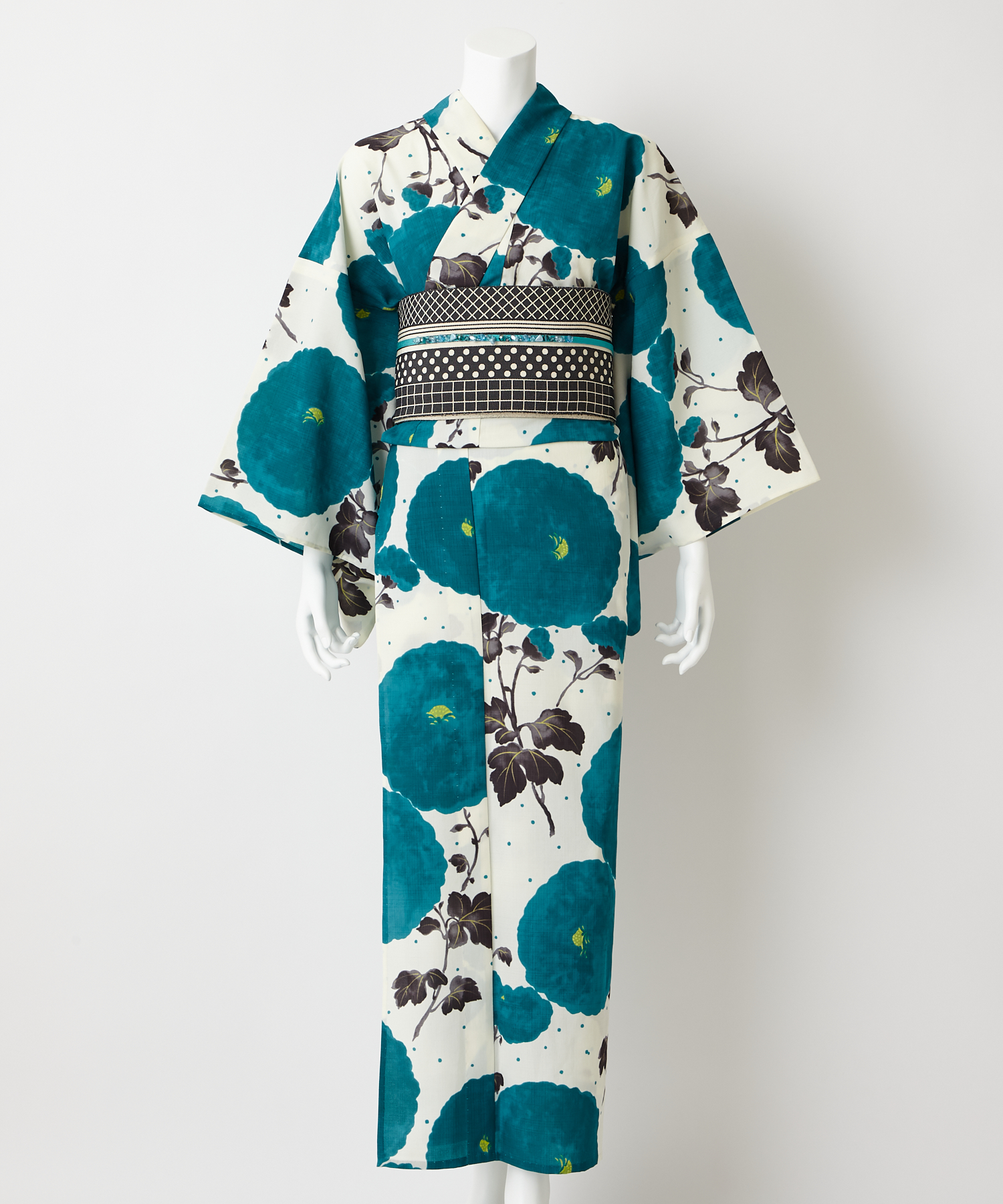 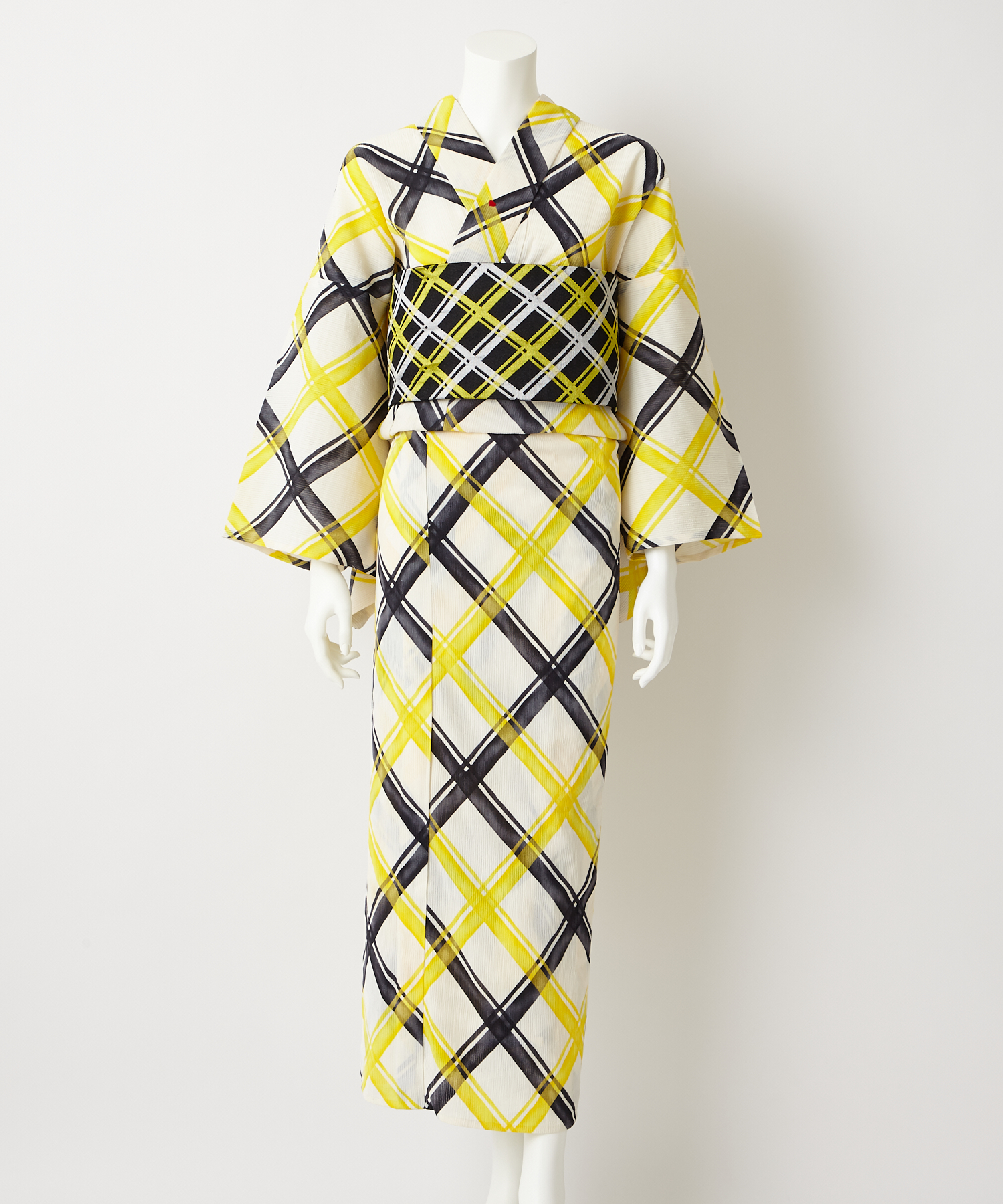 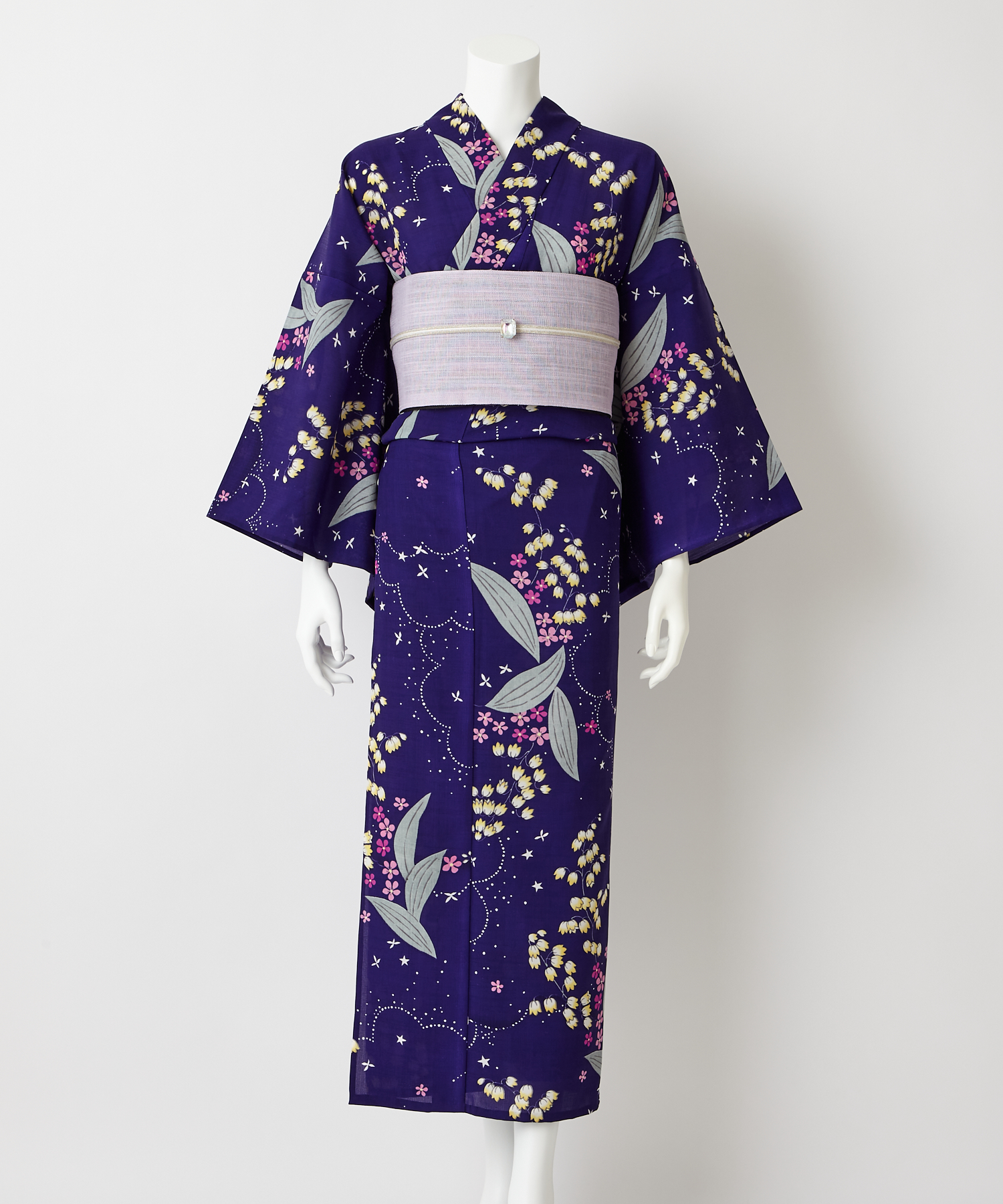 ― “Dream lover” is designed only with geometric patterns.
For Dream lover, we also made a strip with the same geometric pattern as the yukata. Coordination of the obi with the same pattern as the yukata has a fresh taste, and was favored mainly by those who often wear yukata. The “Mumapple” of the same season have a design with mottled chrysanthemums in contrast to the “dream lover”. By adding a color that is blurred with water, the design has a depth. When designing, the depth is always something to keep in mind, and I think that the impression of a yukata will change greatly depending on whether or not you put effort into it.

2013  The effect of collaboration 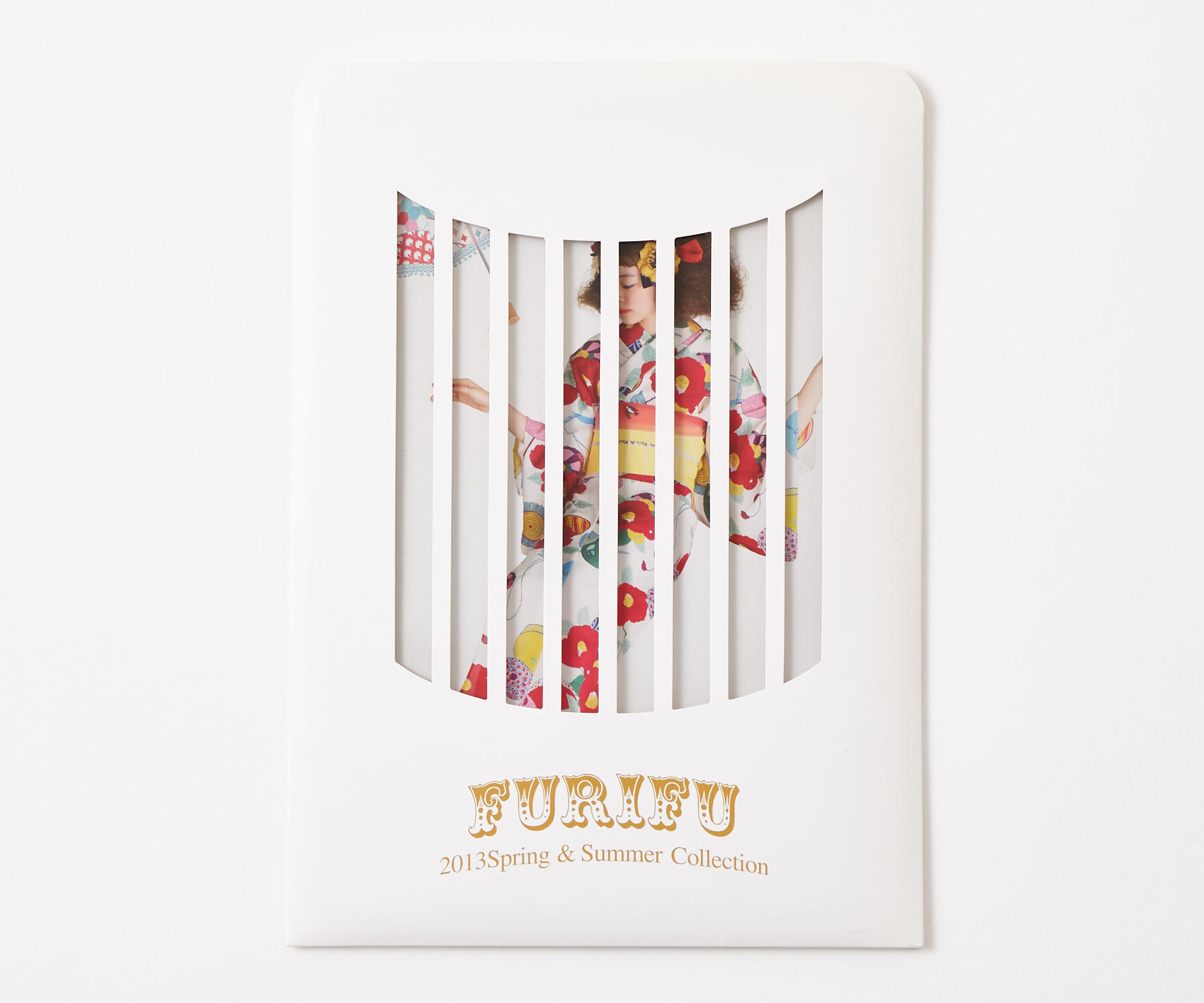 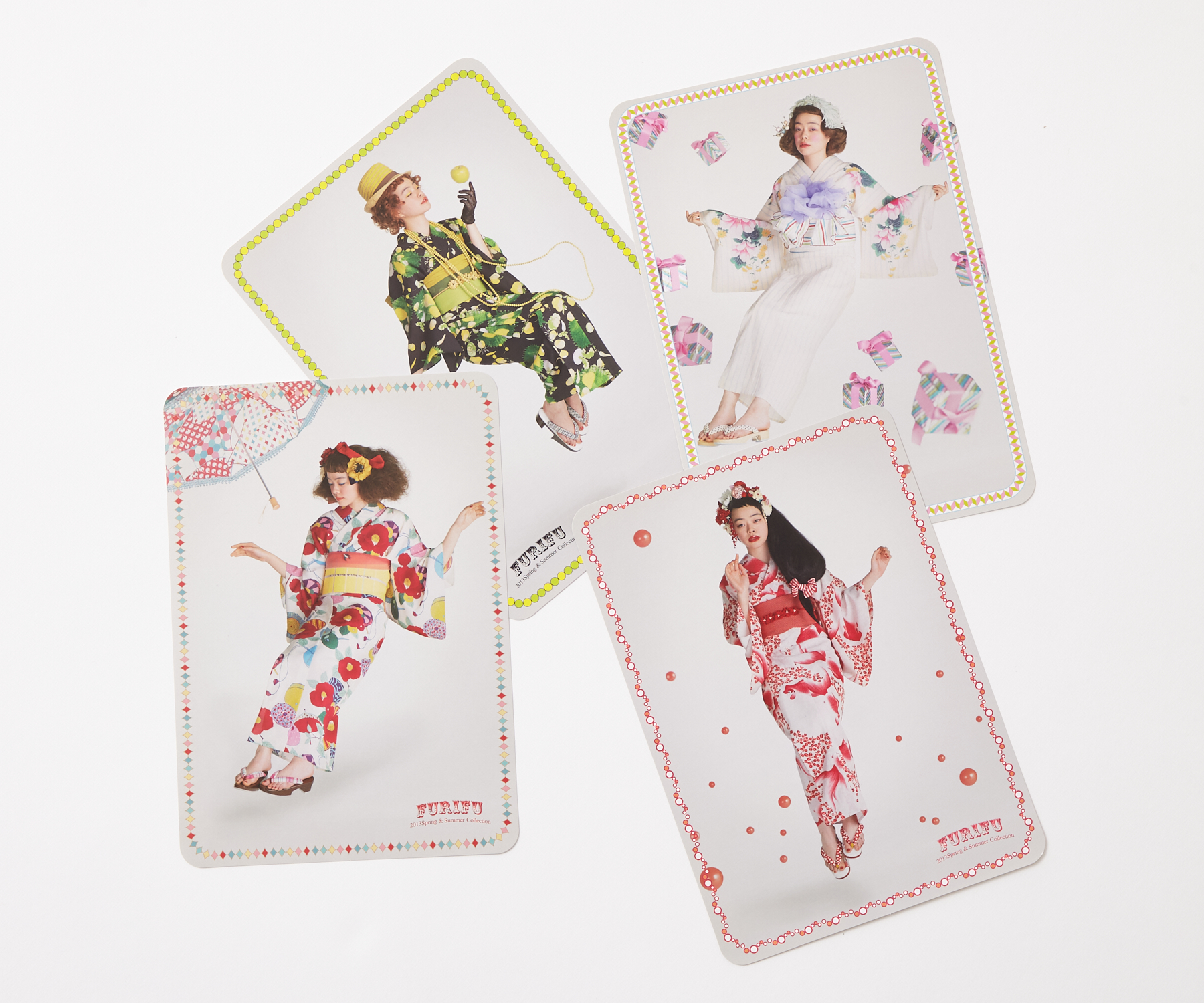 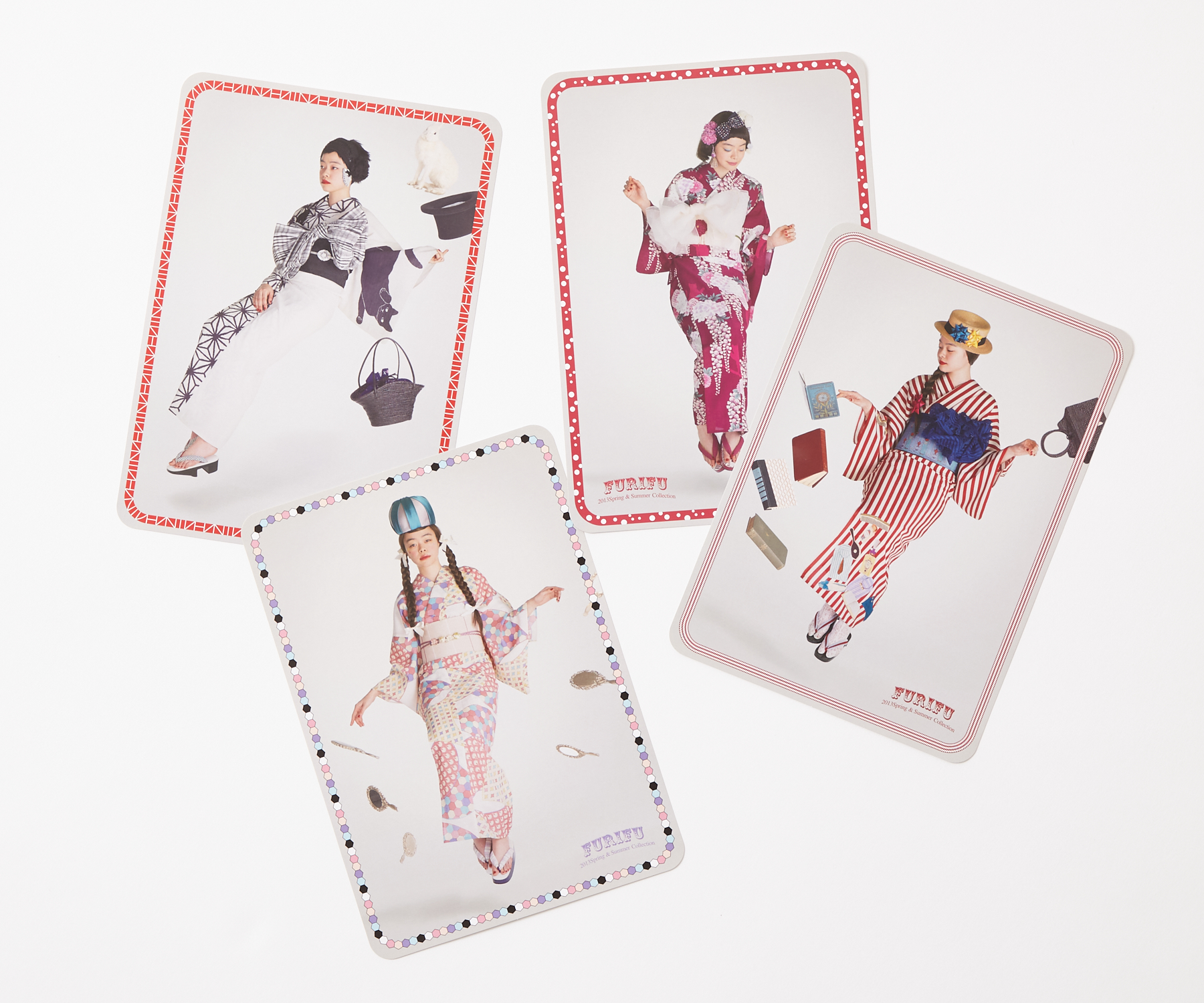 -The catalog specifications have diversified
Catalog production begins with telling the art director (AD) about the theme and letting them understand what kind of collection it is. After that, we will get ideas from AD, decide the visual direction before shooting, share the image with photographers, stylists, hair and makeup people, and then shoot. For me, catalogs are an “important picture book” that tells customers the stories they have carefully created, so I put a lot of effort into making them. So, I think it’s natural that the design of the catalog changes depending on the theme, and I enjoy making it every time, considering that as the final finish. 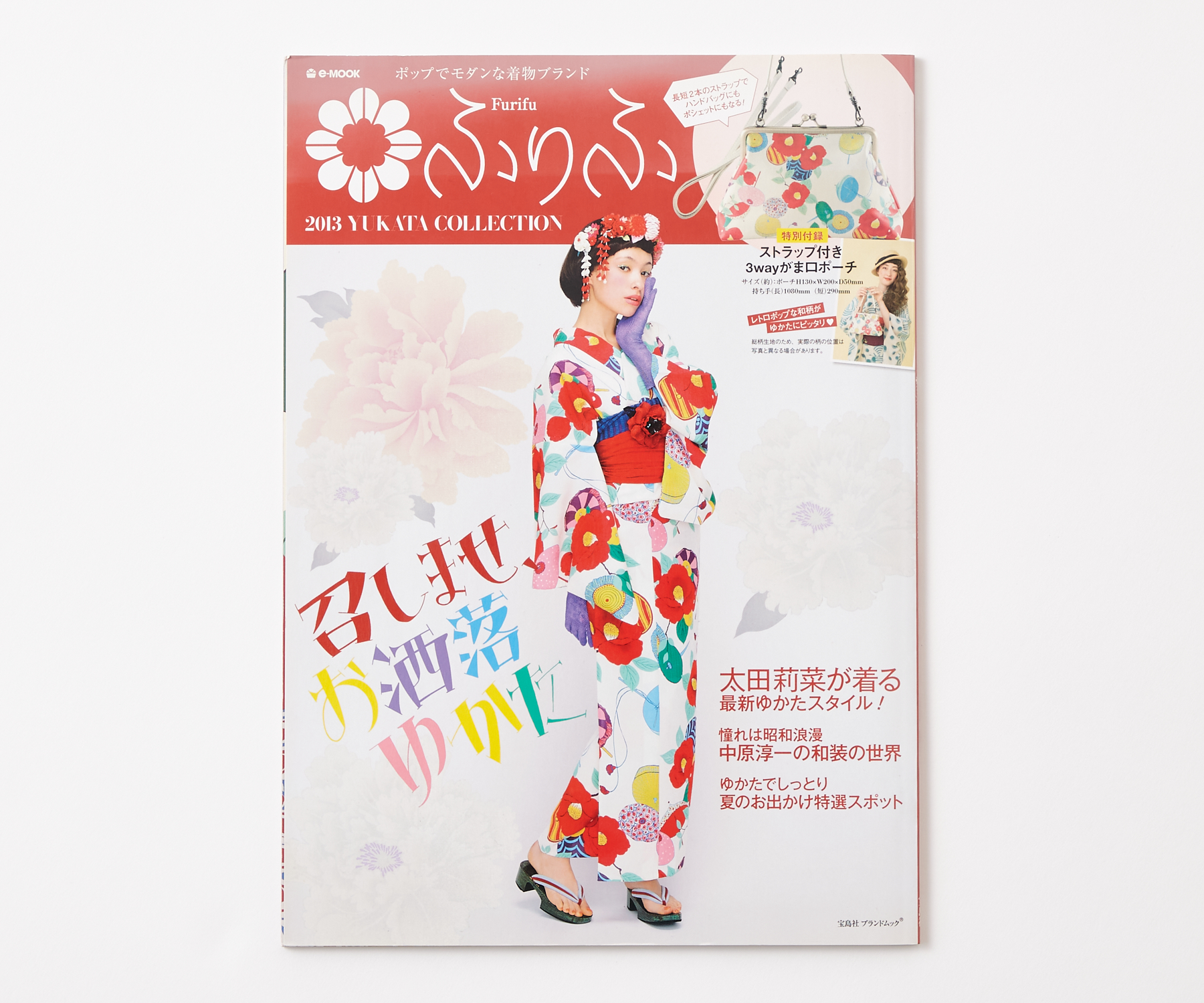 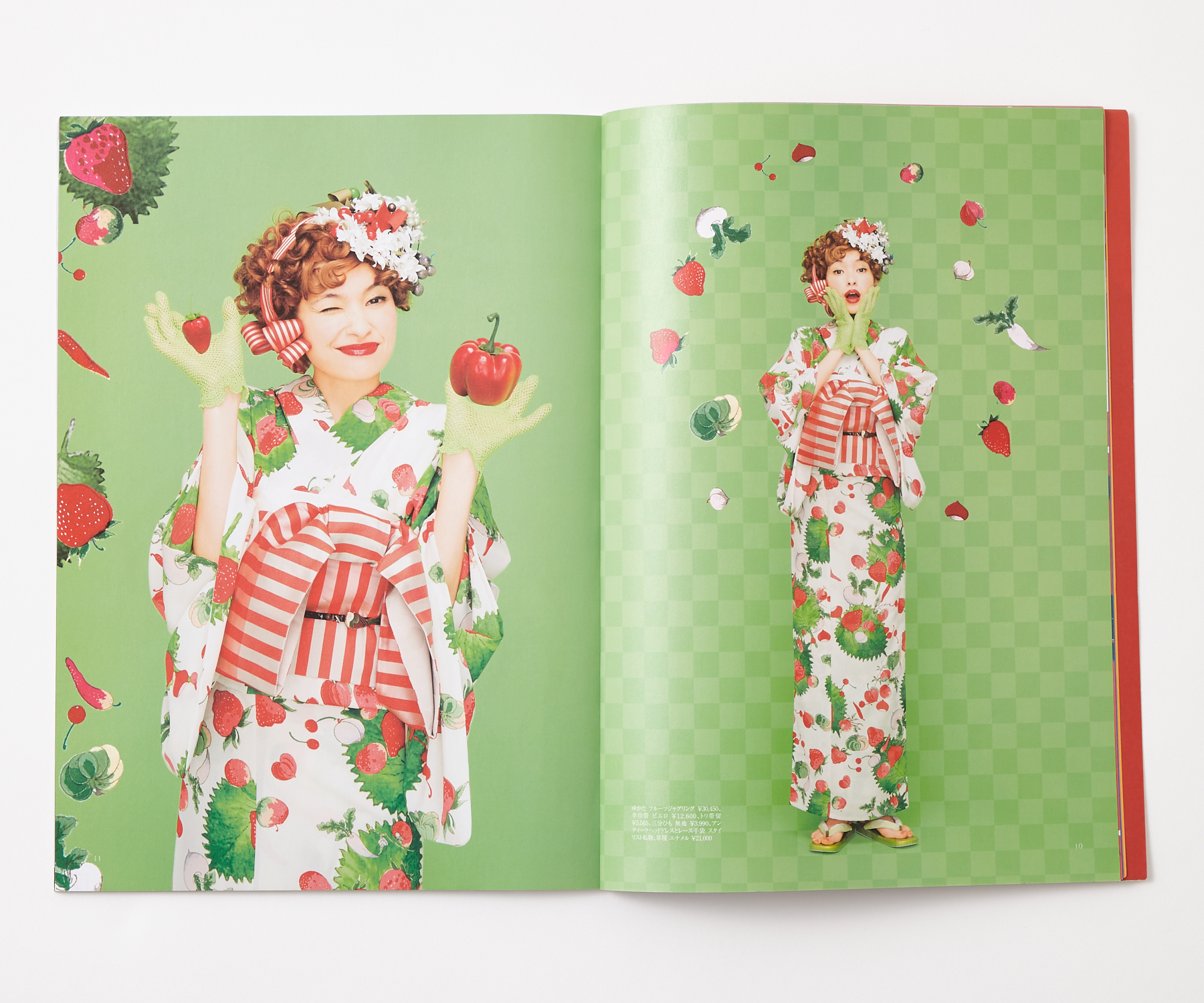 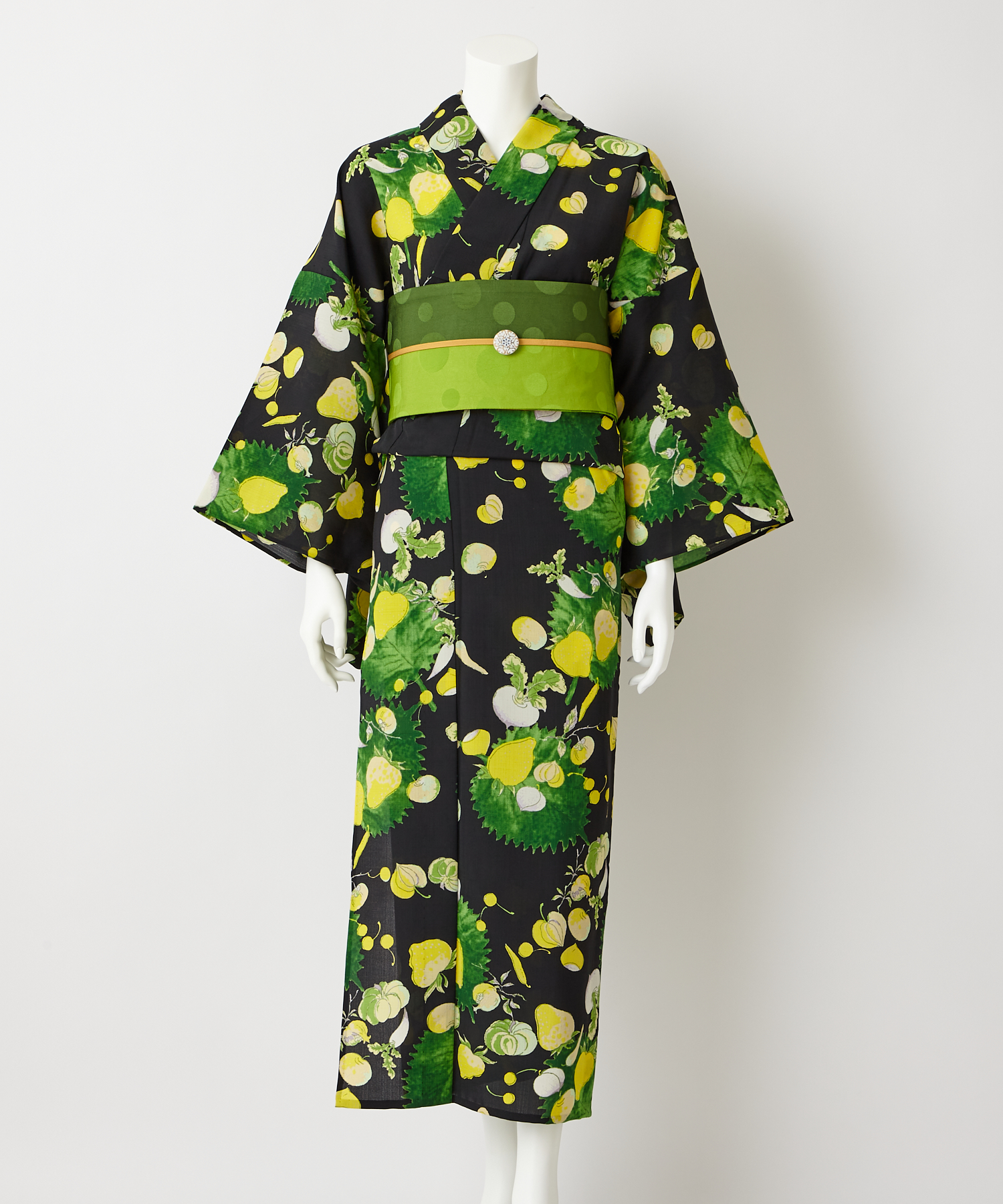 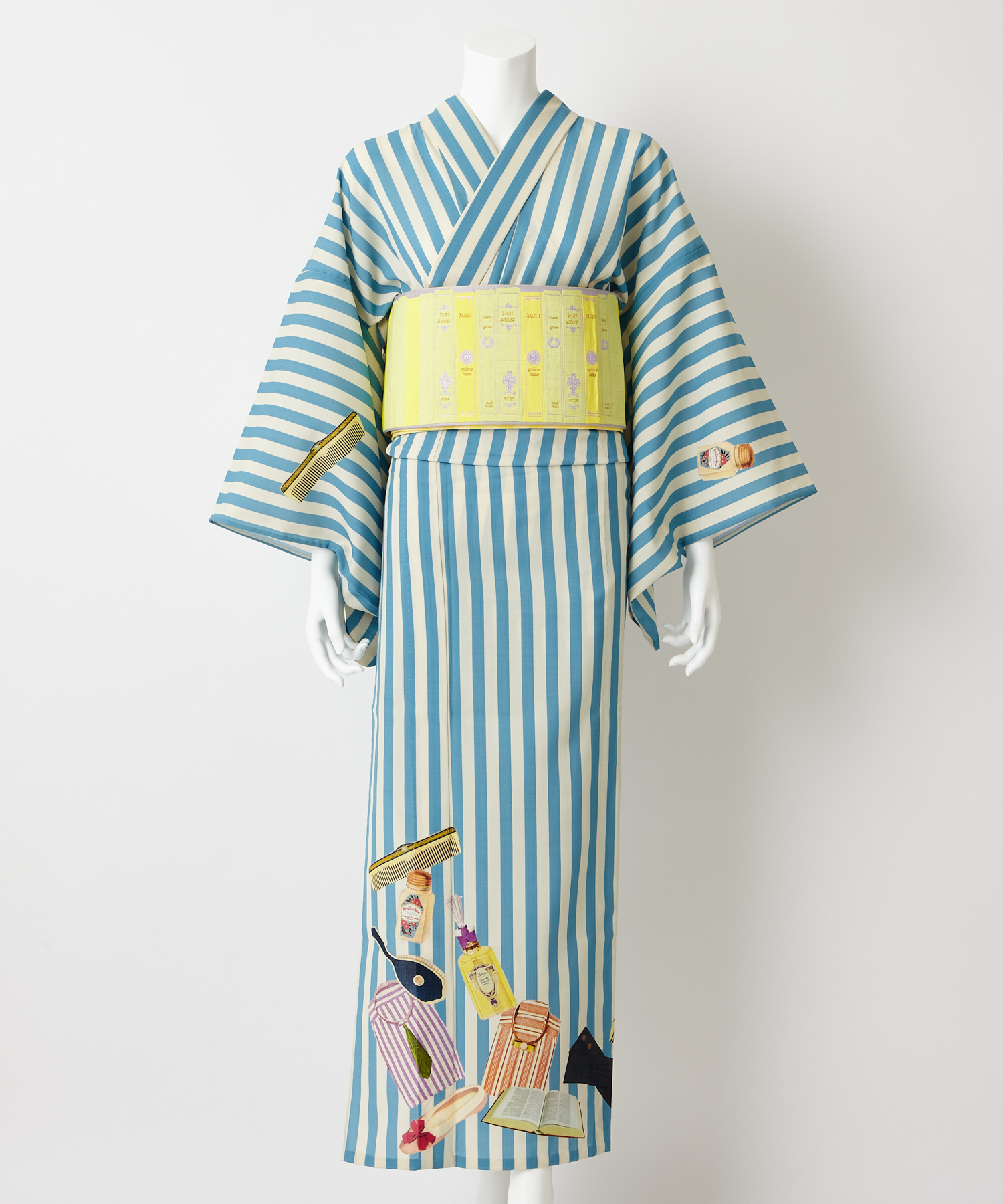 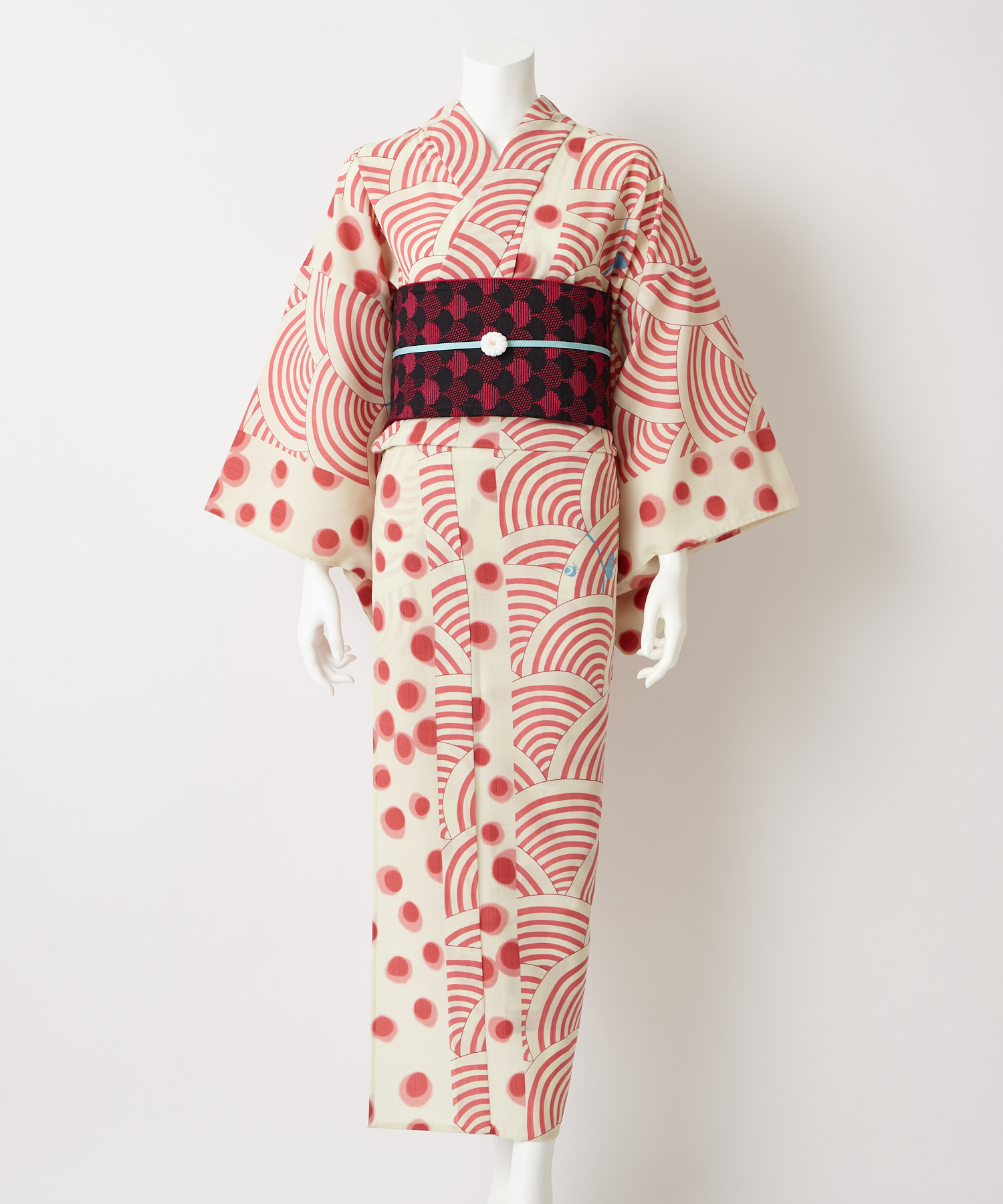 ― “Scott”, a collaboration item with stylist Miki Aizawa, has become a hot topic.
Mrs. Aizawa is a person with a strong sense of sensitivity, so I was convinced that making a yukata together would be fun. When I thought about design together, I didn’t decide on the theme, and started by listening to the items that Aizawa was interested in. From the word “antique motif” that appears there, I feel like we have come up with ideas and proceeded with the design. I hadn’t collaborated with anyone before, so it was fresh and interesting.

2014 I was aware of geometric patterns x motifs 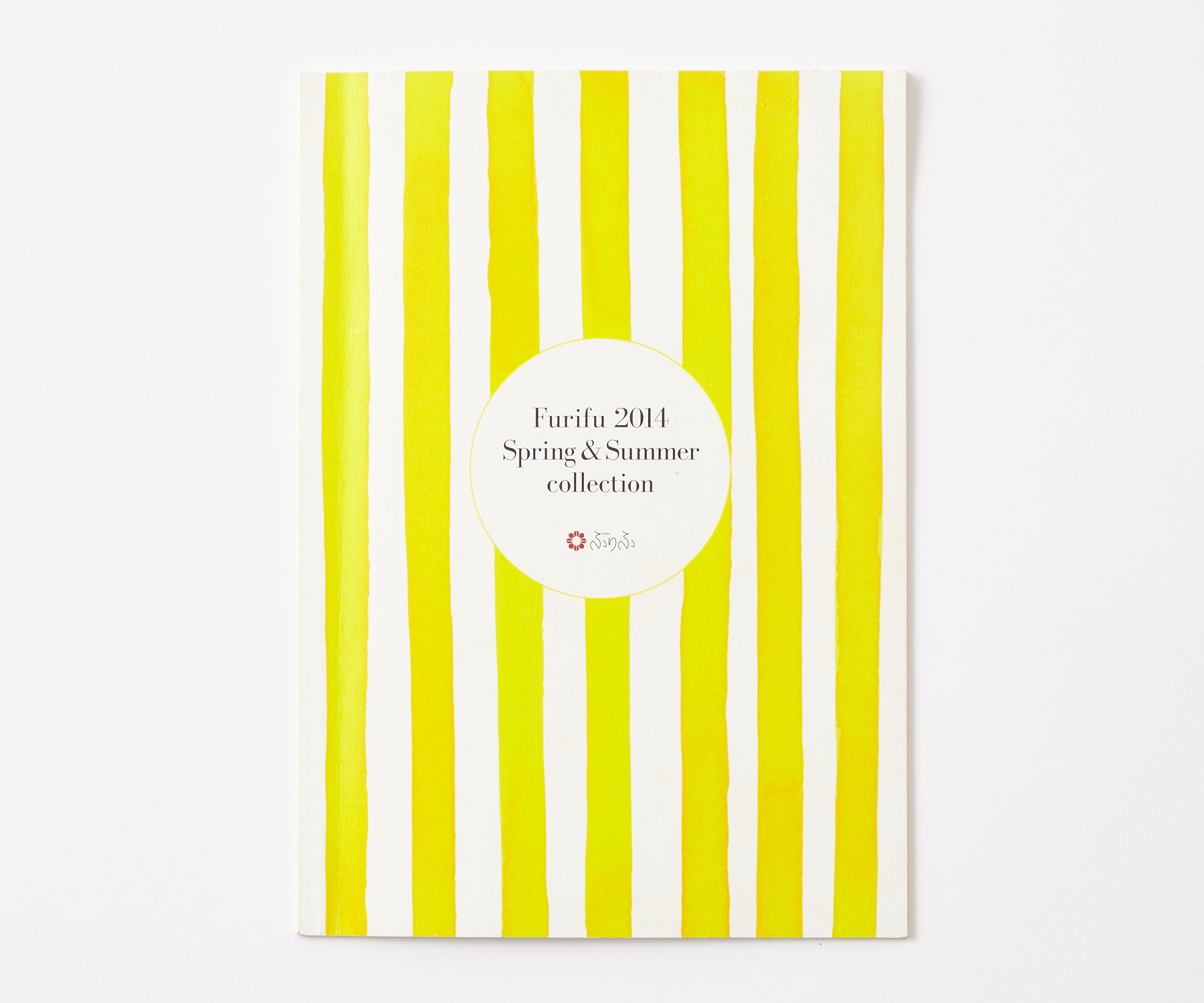 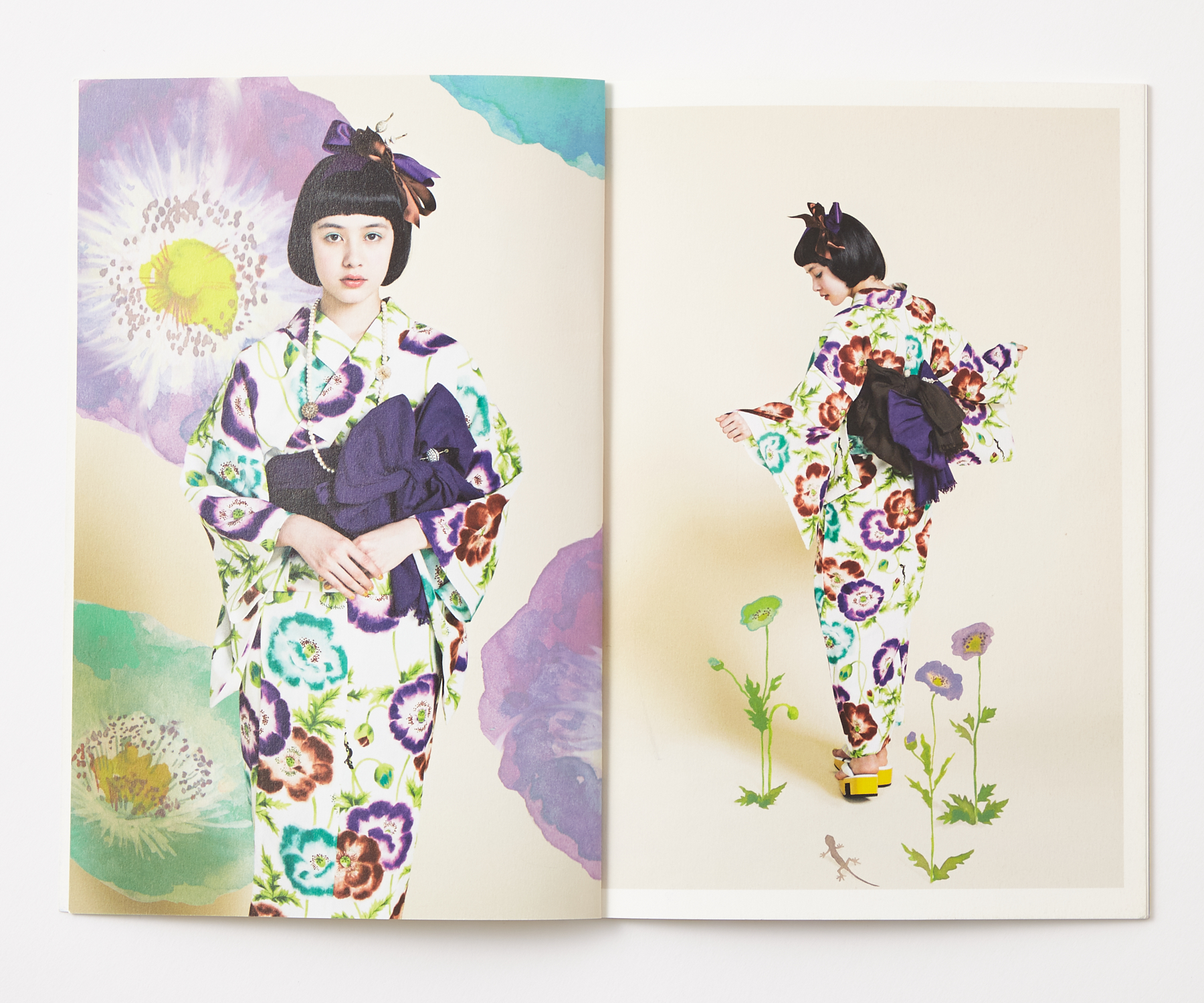 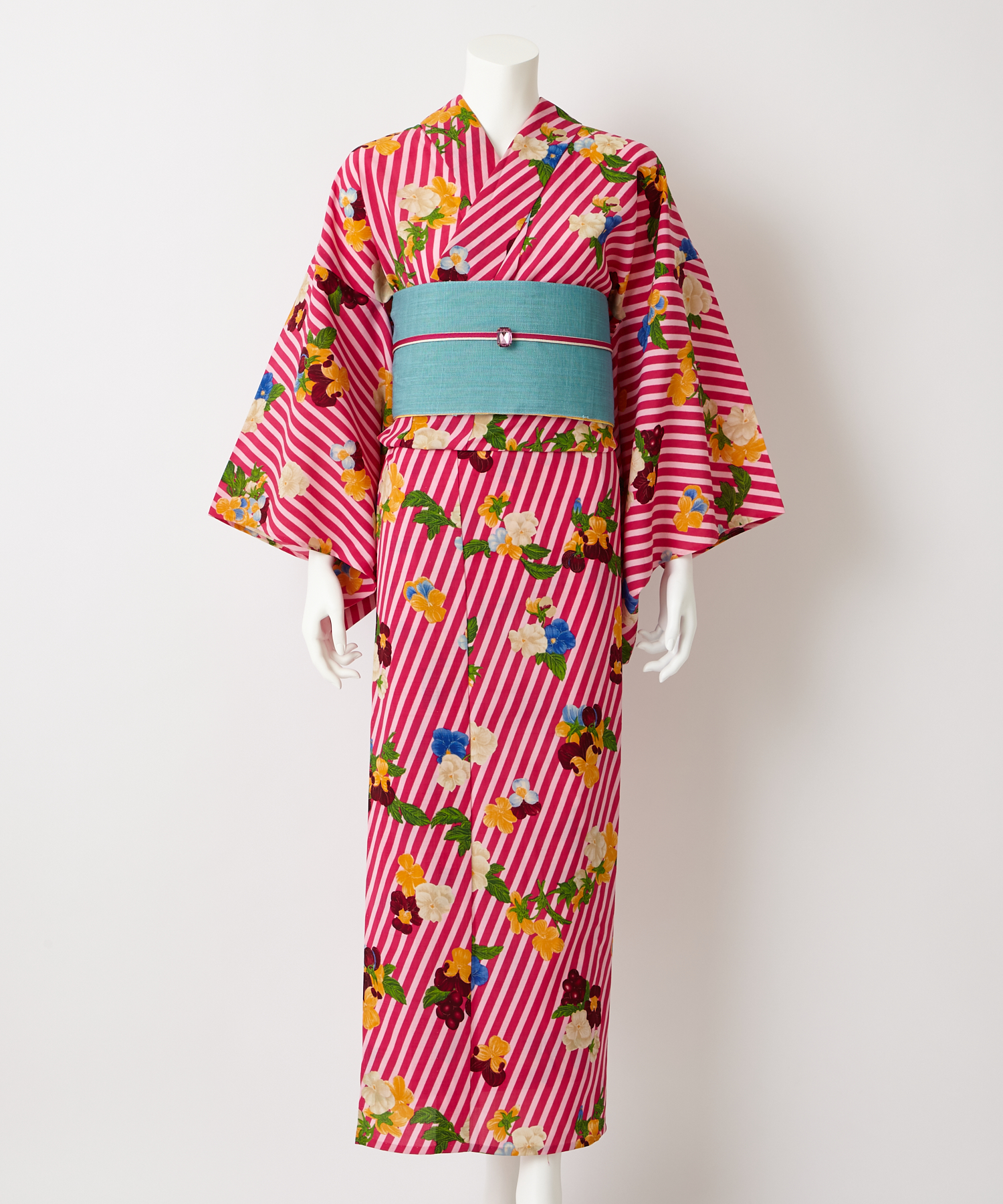 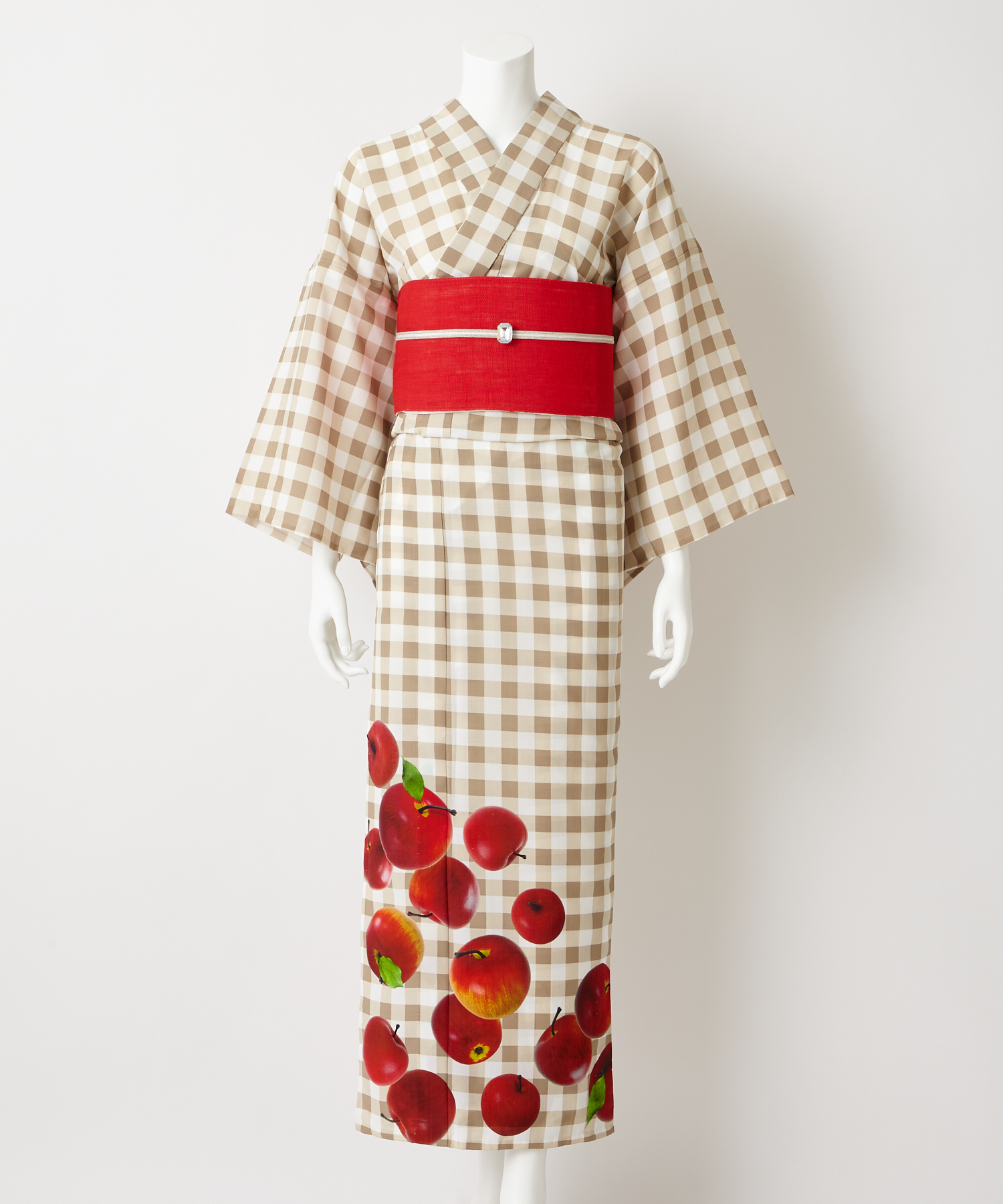 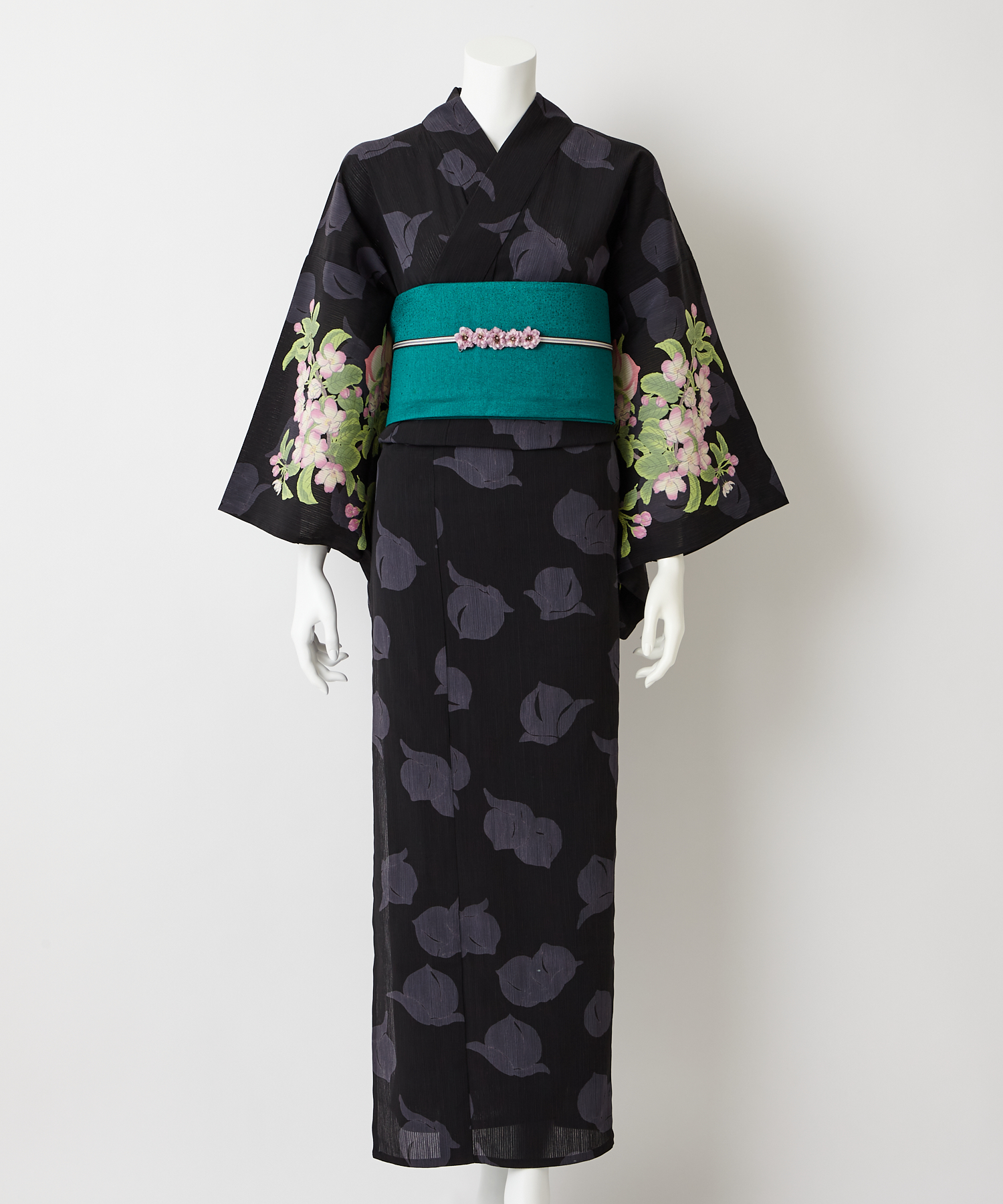 ― It’s the season when many fruit motifs appeared
Since the theme was “Waterside Marche”, the main motifs are vegetables and fruits. “Grape pansies,” “apples,” and “Momoko” are all yukata with a fruit motif, but they look different. However, the base uses geometric patterns such as gingham check, bias, and dots. The geometric pattern x motif was the point of design that I was always aware of at the time.

Compared to the base created in 2005-2009, the five-year period 2010-2014 was a period in which the “Furifu-likeness” was strongly emphasized, and I think it was also the time to dig into the brand. And it has been 5 years since many creators have been involved in Furifu. I think it was a period in which I was able to deepen my focus by deepening the axis of the brand with the help of various people.

Next time, we will deliver [Collection/2015-2020]! looking forward to.
We will carry out a popular yukata popularity survey on Instagram. Yukata selected as the first place may be reprinted next year! ? Please join us as well.